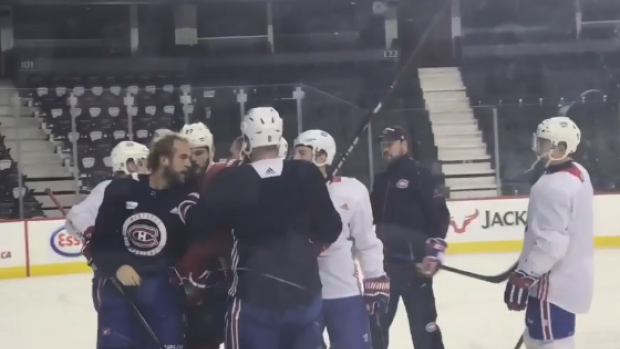 Any hockey coach will tell you that you must practice hard, and on occasion, those hard practice habits and can boil over and create little scuffles out on the ice.

Such was the case at Montreal Canadiens practice on Thursday afternoon when hardnosed winger Andrew Shaw and defenceman Joe Morrow had to be separated by teammates at a practice from the Scotiabank Saddledome in Calgary.

Jermain Franklin, who covers the Flames for TSN, caught the tail end of the video between the two Habs players. While this video doesn’t show how the two players started the mini kerfuffle, you can see them being separated by Brendan Gallagher, Charles Hudon, Jordie Benn and Alex Galchenyuk.

Andrew Shaw and Joe Morrow got into a little scuffle at #Habs practice on Thursday. #Canadiens . (Via @jermain_franklin)

Thanks to the folks over at Reddit Hockey, there’s another video that’s popped up. The camera pans right to Shaw and Morrow exchanging some words, with Shaw propelling things by taking a chop at Morrow.

This type of stuff used to happen more frequently, and anyone that’s played hockey at high levels know that this happens more than the average person thinks. Still, it doesn’t look great optically for a team that has been criticized for lacking leadership. Hopefully for Habs fans, this was merely two players venting their frustrations.

This isn’t the first time Habs players have mixed it up at practice. P.K. Subban and Brandon Prust dropped the gloves a few years back.

The Habs have just two wins in their last six games after putting together a five-game winning streak after Carey price returned from injury.

Montreal will go toe-to-toe with the Flames on Friday night.