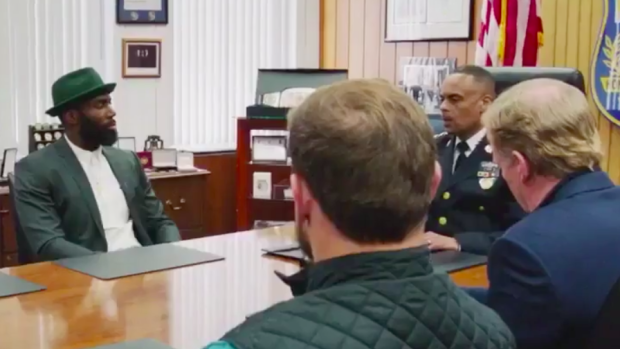 Since playing in his last NFL game in 2016, 14-year veteran Anquan Boldin has turned to activism and humanitarian work in his post-playing career. He co-founded the Players Coalition organization to address racial inequality, and in partnership with the NFL’s Inspire Change initiative, he released an emotional PSA on his personal ties to criminal justice reform.

In 2015, Boldin’s cousin, Corey Jones, was fatally shot by a plainclothes police officer after his car had broken down. Boldin learned of the news after playing in a game with the San Francisco 49ers, and as he shares, Jones’ passing is his personal inspiration for doing what he does.

“There are some things just bigger than football.” #InspireChange pic.twitter.com/HIW1G15VxX

Boldin turned away from the game in large part because he felt that his chance to affect change this was "bigger than football."

Bolding was recently among a group of NFL players that held a community policing town hall in Baltimore, along with Senator Jill P. Carter and other community representatives, and it really is inspiring to see Boldin take action for what he believes in.

"We need to step back and hear both sides."@AnquanBoldin, @MarkIngram21 and former NFL players held a community policing town hall in Baltimore this October. The goal? To bring police and community together for an open, honest conversation. (via @playercoalition) pic.twitter.com/7eNLiDQiQC