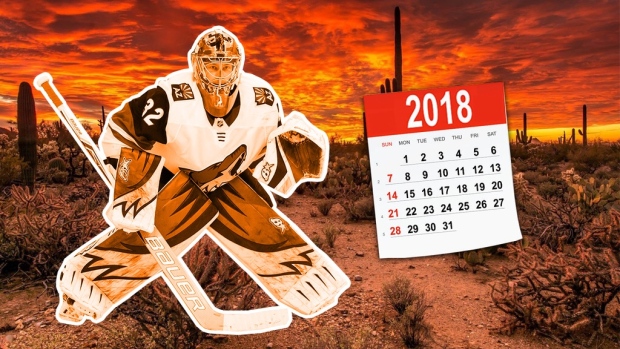 The start of the Arizona Coyotes season was nothing short of a disaster. Although nobody was suggesting they’d be in contention to make a playoff push come spring time, the notion around the league was that the Coyotes were ready to take a step forward with new additions Derek Stepan and Antti Raanta coming over from the Rangers to complement their young forwards Max Domi, Brendan Perlini, Christian Dvorak, and rookie Clayton Keller.

After putting up a, .922, .919, and a .936 save percentage in each of his three previous seasons, GM John Chayka took a gamble on the Finnish goaltender. With Mike Smith off to Calgary, the hopes of the ‘Yotes fell in the lap of their new goaltender. Stuck behind Corey Crawford and Henrik Lundqvist in Chicago and New York, it was now time for Raanta to shine on his own.

Arizona got off to a dreadful start, with the exception of Keller. A few hiccups and stumbling blocks were expected from Raanta getting acclimated to more starts behind an inexperienced Coyotes team that's still trying to learn the defensive aspects of the game. They started the season with a 2-14-4 record before grabbing their first regulation win against the Montreal Canadiens on November 16.

Through his first 20 games of the season, he put together  a record of 5-11-2 with a .912 save percentage, putting the Coyotes in the basement of the NHL standings. Injuries plagued his transition from the Big Apple to the desert, which obviously didn’t help his case with an increased workload.

But right around the calendar year flipped, Raanta began to find his game, and started to get the hang of what it’s like being a No. 1 goaltender in the NHL. Since the start of 2018 calendar year, Raanta has put up fantastic numbers, posting a 14-5-3 record with a .938 save percentage.

No other goaltender in the enitre league from January 1st on has posted better numbers, with a minimum of 14 games played.

How good is @ARaanta31? Had the #Coyotes had him healthy the first two months, this would be a different season. pic.twitter.com/5mpvOGc3Zb

That’s right, the Arizona Coyotes, who currently sit last in the Western Conference with a 27-39-11 record, have the hottest goaltender in the entire NHL right now.

While Raanta hasn’t taken the lion’s share of starts you might expect, it’s still extremely impressive how the Coyotes season has gone as a whole. If you look at the game logs from the start of the season, the ‘Yotes were in a lot of those games, so perhaps the hockey gods have decided to give the team some puck luck of late. Considering he doesn't get a ton of goal support, you have tip your cap to the 28-year-old.

It’ll be interesting to see how the market plays out for the soon-to-be unrestricted free agent. Do the Coyotes, who operate on a tight budget, attempt to re-sign him and try their hand at putting together a more consistent season next year, or do they let Raanta walk in free agency because other teams will likely outbid them?

Antti Raanta's .927 save percentage in 43 games isn't going to be a big enough body of work to get him a Vezina nod, but someone's going to give him a few fourth or fifth place votes. And he's absolutely going to deserve them. He's been unreal.

In a season that hasn't gone the way the club hoped, the club's best option might be to bring Raanta back. He's shown that he's capable of holding the team together as somewhat of a stop gap as they continue to build towards their future.  He’s only making $2 million per season, and given the second half of his performance, he’s likely to see a nice raise next season. The goaltending market is looking a little weak this summer, with the likes of Robin Lehner, Petr Mrazek and Philipp Gurbauer potentially being the biggest names on the market.

Because of @CJTDevil I wanted to plot GSAA/30 and Adj SV% for all starters since 2/15, moral of the story is Keith's been great but Antti Raanta...whoahttps://t.co/1SZGG2u1iP pic.twitter.com/tIdg0lhC25

Arizona doesn't get a ton of media coverage considering where they play and the fact that they haven't made the post-season since they lost in the 2012 Western Conference finals, but their goaltender's impressive campaign might be the most underappreciated story of season, especially the second half of the campaign. His record is up to a respectable 19-16-6 as a whole, while stopping .927 of the shots directed at him.