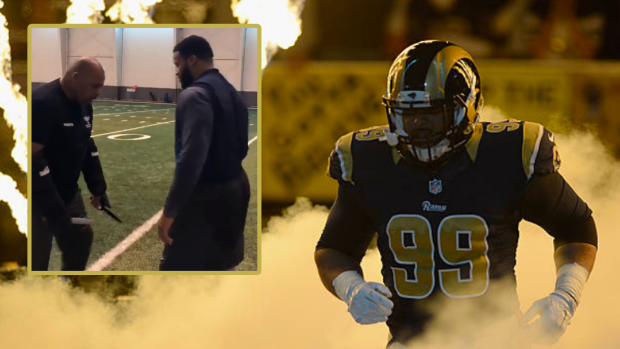 Despite what some training videos may tell you, each athlete has their own individual way of becoming the athlete they are, and progressing into a better athlete in the future. For Aaron Donald, apparently that involves a trainer coming at him wielding two “knives”.

There’s a good chance this could be another one of those hilarious jokes that come on this one specific day, or that the knives are blunt and fake, but Donald seems to be fairly well practiced at the exercise. We aren’t sure exactly how fending off an armed attacker will help with defensive pass rushing but, once again, to each their own.

If this is real, you would have to wonder how the Los Angeles Rams feel about this exercise. Last thing the team needs, which is hoping to be a contender this coming year, is for their star defensive tackle to go down with an injury caused by what would likely be called a “freak accident. It wouldn’t be the first freak injury of this year…

Martin Perez suffered broken radial head in non-pitching elbow in incident with a bull. Had surgery last week. Prolly out until May 1.

Salvador Perez says he missed a step while carrying luggage in his house. His left knee hyperextended and the MRI showed a Grade 2 tear of his MCL. He’ll miss four to six weeks: pic.twitter.com/GHNXQaBO9t

Embiid takes a shoulder to the head from Fultz. Wobbly as he heads to locker room pic.twitter.com/9gEDJwXgOv

"That is unbelievable." A freak accident forces the @Braves to take Johan Camargo out of the game before the 1st pitch. Stay tuned for more. pic.twitter.com/vq7chWx7VV