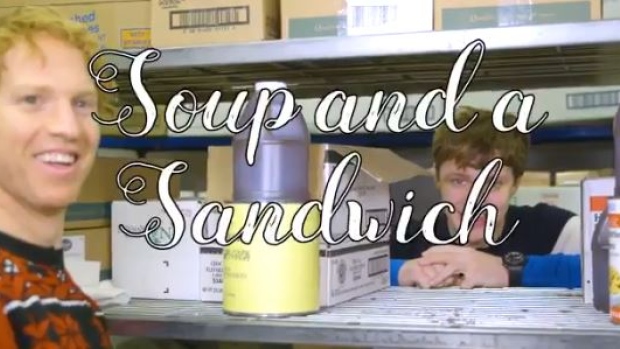 Chicago Blackhawks Artemi Panarin and Brian Campbell have nicknames that make for a perfect lunch combo. Panarin goes by ‘The Bread Man’, while Campbell is known as ‘Soupy’, which is a reference to the Campbell Soup Company. Since soup and a sandwich is the classic go-to lunch combo, the Chicago Blackhawks decided to start a web series featuring the two players called ‘Soup And A Sandwich’.

The team released the new series earlier this afternoon and dropped the first two episodes of the show. They’re not very long episodes, but they’re pretty great.

There wasn’t much to see in the first episode, but the team made up for it by releasing the second episode which is full of entertainment.

Help yourself to a second serving of #SoupAndASandwich because we've got a double episode premiere on the stove today! pic.twitter.com/gtTSygtxR2

Panarin looks very uncomfortable at the beginning and gives off the vibe that he can’t wait to get off the show.

By the end he was holding back the laughter and smiles, though, and is ready to return next week with the third episode of the series.

Tune in next Wednesday at noon for another installment of #SoupAndASandwich! pic.twitter.com/MNBEJzzC9P

Make sure you tune in next week to see what lunch combo The Bread Man and Soupy try next.