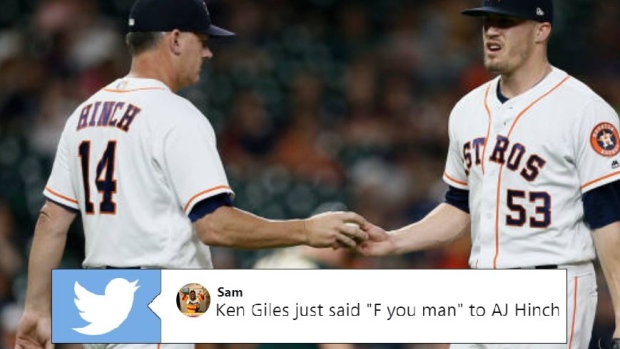 It’s been a tough year for Ken Giles of the Houston Astros. He came into the season in the closing role, but that seems to have been taken away from him after he pitched himself to a 4.99 ERA on the year. While his numbers aren’t all bad (31/3 K/BB ratio and 12 saves on the year), his tendency to get blown up from time to time has caused him to fall out of favour when it comes to save situations.

How’s he taking it? Well, it doesn’t seem like very well.

A video of Giles went viral earlier in the year when he appeared to punch himself in the face in frustration.

Uh, did Ken Giles just punch himself in the face? pic.twitter.com/Y8kbDIDVtl

This wasn’t just an isolated incident for the ultra-competitive Giles it seems. The fiery right-hander was removed from a game against Oakland when he gave up three runs while failing to record an out, and as a result he appeared to direct an obscenity in the direction of Astros manager A.J. Hinch as he approached the mound.

Ken Giles just said "F you man" to AJ Hinch when pulled after giving up two hits and not recording an out in the 9th. Please get rid of him. pic.twitter.com/jvoVh5bI6Y

Unsurprisingly, Giles was promptly sent down to the minors. While Hinch and the Astros organization maintain that the send down was to get his game right, and that they didn’t know whether the flared temper was directed specifically at the manager, the send down may very well be a result of something more than giving up runs.