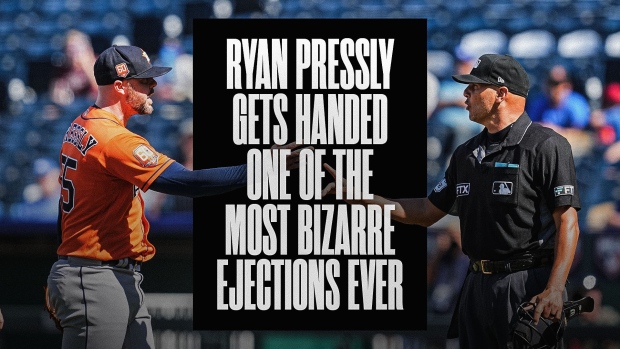 On Sunday afternoon, baseball fans witnessed one of the most bizarre ejections.

The Houston Astros led 7-3 in the bottom of the ninth when Michael A. Taylor came up to bat for the Kansas City Royals. Ryan Pressly was one out away from a victory when he was issued a warning for throwing the ball inside on Taylor.

Now just so we’re clear, the ball did not hit Taylor. It was just pitched far inside on him.

The situation at most called for a warning, but home plate umpire Vic Carapazza felt differently as he ended up straight up EJECTING Pressly.

Ryan Pressly was ejected with two outs in the 9th inning of a four-run game after the ump came out to issue him a warning for going inside on Michael A. Taylor pic.twitter.com/0ZxqwbNR65

Pressly spoke with the media following the game.

Ryan Pressly: “I guess we’re not allowed to pitch inside in the big leagues anymore … I’m human. I will miss inside. To warn me after something like that and to throw me out after questioning it, you have to be better than that.”

Asked what set him off, Ryan Pressly replied: "(Vic Carapazza) said he (could) have thrown me out after the first pitch. I asked him why would you do that. He thought I was doing it intentionally. I didn’t know he could read my mind."

This situation was definitely unwarranted and completely bizarre.