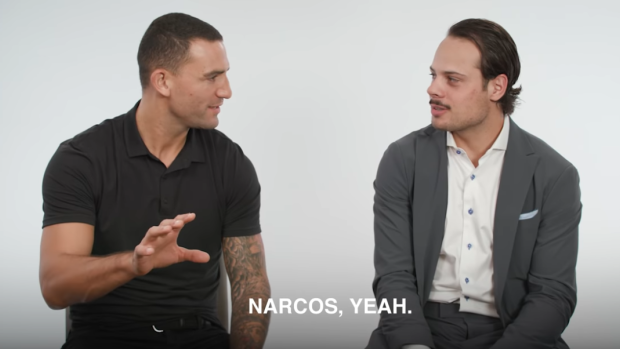 Since the start of the 2019-20 season, some Leafs fans have become fixated on Auston Matthews' moustache.

With Movember now over, the Leafs centre is still rocking the muzzy that he debuted at the start of training camp upon returning from his summer home in Arizona.

Recently, the Leafs centre caught up with BizNasty, who teamed up with the NHL to do various interviews with superstars around the league.

Doing his best investigative journalist work he could, Biz asked Auston about the 'stache about it becoming somewhat of a big deal (see what we did there, BizNasty fans).

"I think its funny people made it a big deal l and that they care so much."

"They care a lot, which is obviously a good thing."

Bissonette joked to Matthews that social media made the connection to the popular Netflix show, Narcos, that he resembled Pablo Escobar's character.

"You know my heritage played a little part in it."

"I looked like a slimmer version of the guy."

A night after the Leafs fell to the Avs for their second loss in back-to-back games, Matthews was with goaltender Freddie Andersen taking in the Raptors and Rockets game courtside.

Auston Matthews and Freddie Andersen taking in the Raptors and Rockets game. pic.twitter.com/qh8x5lneB4

Matthews has scored at over a point-per-game pace with 31 in 30 games (16 goals, 15 assists) but has taken criticism recently for his effort levels in the defensive zone.