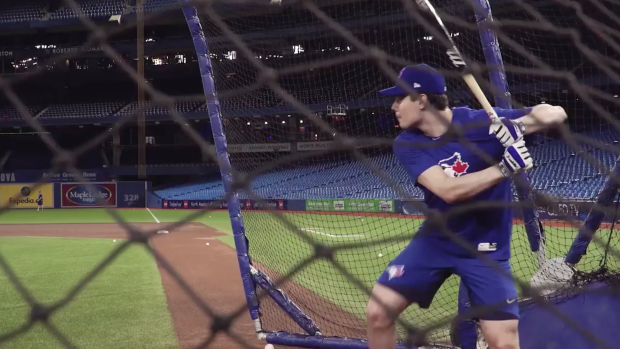 Thursday, while the Blue Jays were playing a double-header in St. Louis, the Toronto Maple Leafs were showing off their baseball skills at the Dome.

Auston Matthews, Matt Martin, Connor Brown, Mitch Marner, Frederik Andersen, Connor Carrick, and James van Riemsdyk all took batting practice and flashed leather in the field while the Jays were out of town.

The Blue Jays Twitter account also put together the best highlights from the day, one of which included Auston Matthews hitting a home run.

The Buds may play hockey, but they still hit 💣 at Rogers Centre today. Thanks for stopping by, @MapleLeafs! #LetsRise pic.twitter.com/fvtDtg2lpR

We also want to point out that JVR went yard, too, so Matthews has some company in that department.

What many might not know, though, is that Matthews was a pretty talented baseball player growing up.

His dad played for Loyola Marymount University and Auston followed in his footsteps when he was growing up.  Matthews was a catcher, but at the age of 13, he decided he was going to stick with hockey.

Safe to say that's turned out pretty well for him: