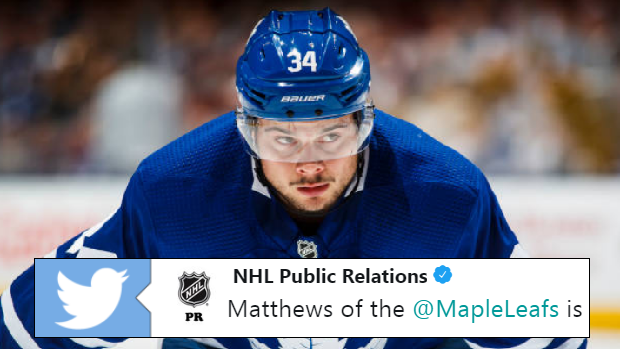 Auston Matthews saw his goal-scoring streak to start the season end last night, but he still managed to make history in the stats column.

Heading into his Leafs' 4-1 win over the Los Angeles Kings, the 21-year-old was riding an incredible streak of six consecutive multipoint games and kept the ball rolling with two assists on each of new line-mate Kasperi Kapanen’s goals. With the deuce, Matthews became just the fifth player in NHL history to record multiple points in each of his team’s first seven contests to begin the season. He managed to join some pretty elite company in the process.

Auston Matthews of the @MapleLeafs is the fifth player in NHL history to record multiple points in each of his team’s first seven games to open a season. #NHLStats #LAKvsTOR pic.twitter.com/9GCbBhqoZP

It’s been a year full of milestones so far for the American. Take the Leafs’ previous 3-0 win over the Detroit Red Wings for example, in which he became just the 5th player in the Modern NHL era to score at least 10 goals in his team’s first six games to start the season. Not even Gretzky managed to do that in his career!

Auston Matthews becomes just the 5th player in the Modern #NHL era to score at least 10 goals in his team's first six games of the season 😲. . (H/T Mark Masters/Twitter)

As it stands, the Leafs’ superstar has 16 points in 10 games while leading the Leafs to a 6-1 record. It’s early but this is starting to have the look of a Hart Trophy season.