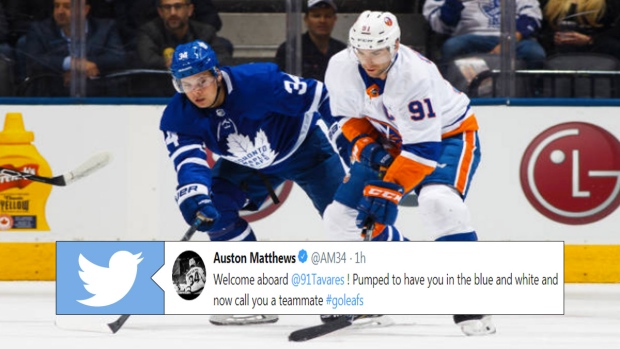 The Toronto Maple Leafs did what most people expected them to do on the opening day of NHL free agency as they locked up John Tavares to a seven-year, $77 million deal.

The Leafs reportedly went into their meeting with Tavares and his reps with a special pitch planned and it turns out Auston Matthews might have played a part in helping land the five-time NHL All-Star.

Told that Auston Matthews is absolutely ecstatic about the Tavares news; Matthews reached out to Tavares during the process encouraging him to join the Leafs.

Not only did Matthews reach out to Tavares to let his new teammate just how stoked he is to have him on board, but he also tweeted about it, which is pretty big considering he’s not the most active athlete on Twitter.

Welcome aboard @91Tavares ! Pumped to have you in the blue and white and now call you a teammate #goleafs

Leaf fans tried to sit and wait as patiently as possible as all their focus went into the Tavares watch leading up to July 1 and now they can breathe a little easier that they have one of the league’s top stars.

John #Tavares is coming home on a seven-year, $77 million deal.