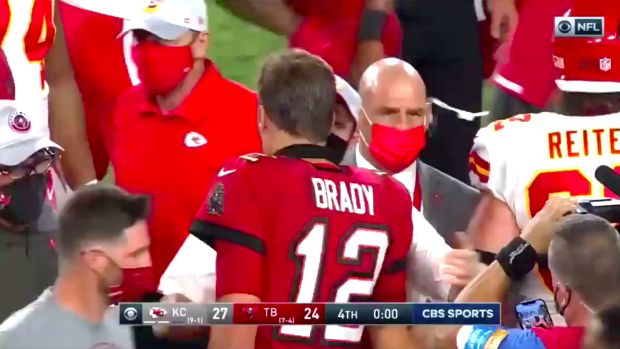 The matchup for Super Bowl LV is set. The Tampa Bay Buccaneers and Kansas City Chiefs both won their respective conference final games on Sunday, securing a berth in the Super Bowl two weeks from now. At last, it’s down to the final two.

Around this time of year, there’s always a lot of suspense around football, but Tony Romo must be blessed with the powers of foresight or something, because he called this exact matchup in the Super Bowl as far back as Week 12 — following a Chiefs win over the Bucs.

Tony Romo knew after the Week 12 TB-KC matchup, which at that time most outsiders would have opined Tampa more likely to miss the postseason than go to the Super Bowl pic.twitter.com/RntuGqaotW

We guess if you played the game at as high of a level and for as long as Romo did, then you’ll probably know a few things about the game. When the experts make their predictions for the big game, we’ll be tuned into Romo’s for sure.

This will be an unusual Super Bowl with the Buccaneers becoming the first team in NFL history to play the Super Bowl in their home stadium, but the Chiefs did take the only regular season matchup between these two teams, which was played in Tampa. It’ll be thrilling to watch another round of Patrick Mahomes against Tom Brady, that’s for sure.