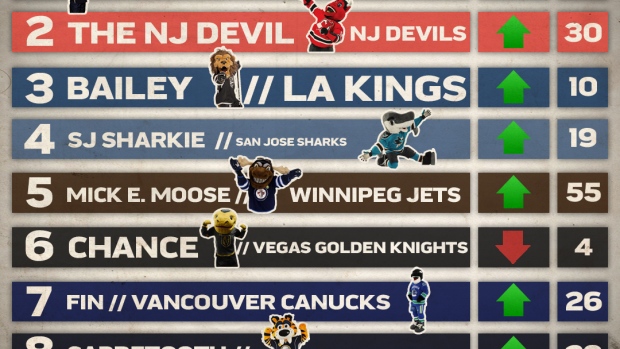 It's Friday and unfortunately for hockey fans looking forward to the weekend, there aren't any games on tonight thanks to the All-Star break.

Don't worry, though, because we've got the perfect piece of hockey content to get you through the night, an NHL All-Star edition of the BarDown Mascot Power Rankings.  Usually we rank mascots from across the sports world, but in honour of All-Star weekend, we wanted to focus on hockey's best mascots for one week.

The BarDown Mascot Power Rankings are now in and Franklin The Dog had a big week. . Visit BarDown.com for details on the rankings

Now, before you respond to these rankings, here are a few things you should know about them before getting angry.  For starters, this isn't a ranking of the ten best mascots in the NHL.

Plus, every mascot on this list will be at All-Star weekend and competing in the mascot's game.  With that in mind, enjoy this special hockey mascots only edition of the BarDown Mascot Rankings.

Striking the “Espo” pose with @ThunderBugTBL. We are ready for the @NHL All-Star weekend in Tampa! #GoBolts @TBLightning pic.twitter.com/dcqmJ1Z7ZP

The All-Star game is in Tampa Bay this weekend, so taking that fact into account, ThunderBug deserves a spot simply for helping host the event.

Get you an All-Star mascot who can be your best friend and tweets like a champions like Nordy.

It is warm here! I can’t stop shedding. #WinterCoat #NHLAllStar

With my buddy at @RoswellPark today! Starting to distribute 600+ knit @NewEraCap caps - one for every one YOU bought at the @BuffaloSabres store at one of our games in December 💛💙 pic.twitter.com/DGNnhUjTNH

Not only is Sabretooth an All-Star on the ice and at games, but he's also an All-Star in the community which is even more important.

.@Sabretooth_NHL stopped by today to give hats to our patients! A huge thank you to @NewEraCap for generously donating more than 600 knit caps from their Knit for Knit promotion! pic.twitter.com/AOOVKciSdz

What is the matter @BaileyLAKings? Scared I will bite??? pic.twitter.com/eGFhaFZJJV

Social media has allowed mascots to interact with fans and other mascots, and leading up to All-Star weekend, there were few mascots funnier on social media in terms of mascot-to-mascot interaction than Fin.

Chance moved down a few spots in this week's edition of the power rankings, but with puns and a great personality, we're sure Chance will be back near the top in no time.

If only all the guys who said I didn't have a Chance could see me now pic.twitter.com/SH5jJBJ8BV

Let’s raise the stakes on this one.... loser buys the winner dinner in Tampa at #NHLAllStar weekend this weekend...

You have to be really confident to make a bet like the one Mick E. Moose made, but it paid off and the Jets' mascot will be enjoying a nice dinner this weekend after enjoying a nice win earlier in the week.

A little flashback to the last time I was in Tampa: pic.twitter.com/2vAXyYkZhc

Sharkie may have lost the bet, but there's another bet coming All-Star weekend and Sharkie hasn't been shy about reminding the world of that fact.

As the #sjsharks head south to the "LA area" to take on the ducks, it reminds me, I need to get back to my training to carry out my #slapbet with @BaileyLAKings ..... #AllSlapWeekend is coming. pic.twitter.com/nU6h4uGeoz

No other mascot is more active on social media than Bailey and the Kings' mascot has finally entered the top ten after an incredible week on Twitter.  Here are some of the highlights:

The @flames are playing @Nickelback

You know what that means 😜

15 Stanley Cup champions have had a streak of losing 7 of 8 at some point during their championship season. #SkyNotFalling

starring role...NO but I would take a recurring role beating the ducks 5 times a year https://t.co/jiLZdzuhXW

NJ Devil hasn't been in the top ten in a little while, but New Jersey's mascot makes a triumphant return thanks to adorable dog pictures, not being afraid to call us out and one awesome Patrick Roy like chirp.

I hope @BarDown and @THNMattLarkin are taking notes right now 📝

The only thing I’m packing is my 3 friends #NHLAllStar pic.twitter.com/2hBrg1GWfe

Looking forward to seeing @NJDevil00 tomorrow at the #NHLAllStarWeekend. Don’t forget to pack my two points from tonight.

We've seen the tweets and heard the complaints.  Gnash has been waiting a long time for this, but the Predators' mascot finally has a place on top thanks to continued excellence at games and on social media.

The gold standard for hockey mascots this week is from Nashville.

Preds win 4-3 over the Panthers. They extend their win streak to 5! Game recap below.. pic.twitter.com/EeZLtW4QZV

@Gnash00 thanks for coming out and entertaining my daughter and her little gnash! pic.twitter.com/4GXD3PBojo

Excited about #NHLAllStarWeekend where we put aside our differences and share our love for hockey. With @NordyWild pic.twitter.com/3RJ4XYdjzE