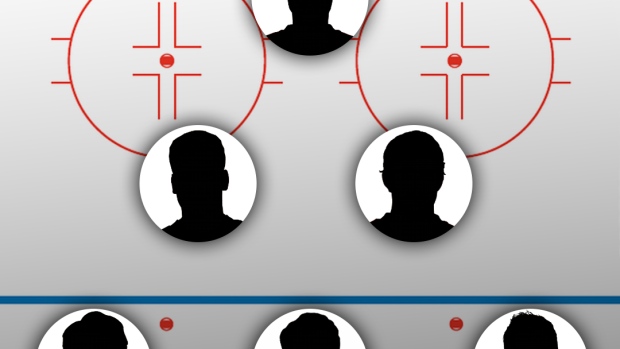 Which province has the strongest starting lineup?

It's no secret that Canada is the best hockey country in the world.

If you take a look back in history, you'll see that each of its provinces has produced some remarkable talent.

For #Canada150, take a look at some of the best Canadian NHL players from coast to coast.

Today, each province has an abundance of players competing in the NHL that would produce an incredible starting lineup. In honour of Canada day, we went coast-to-coast and examined what each one's ultimate starting six would look like. 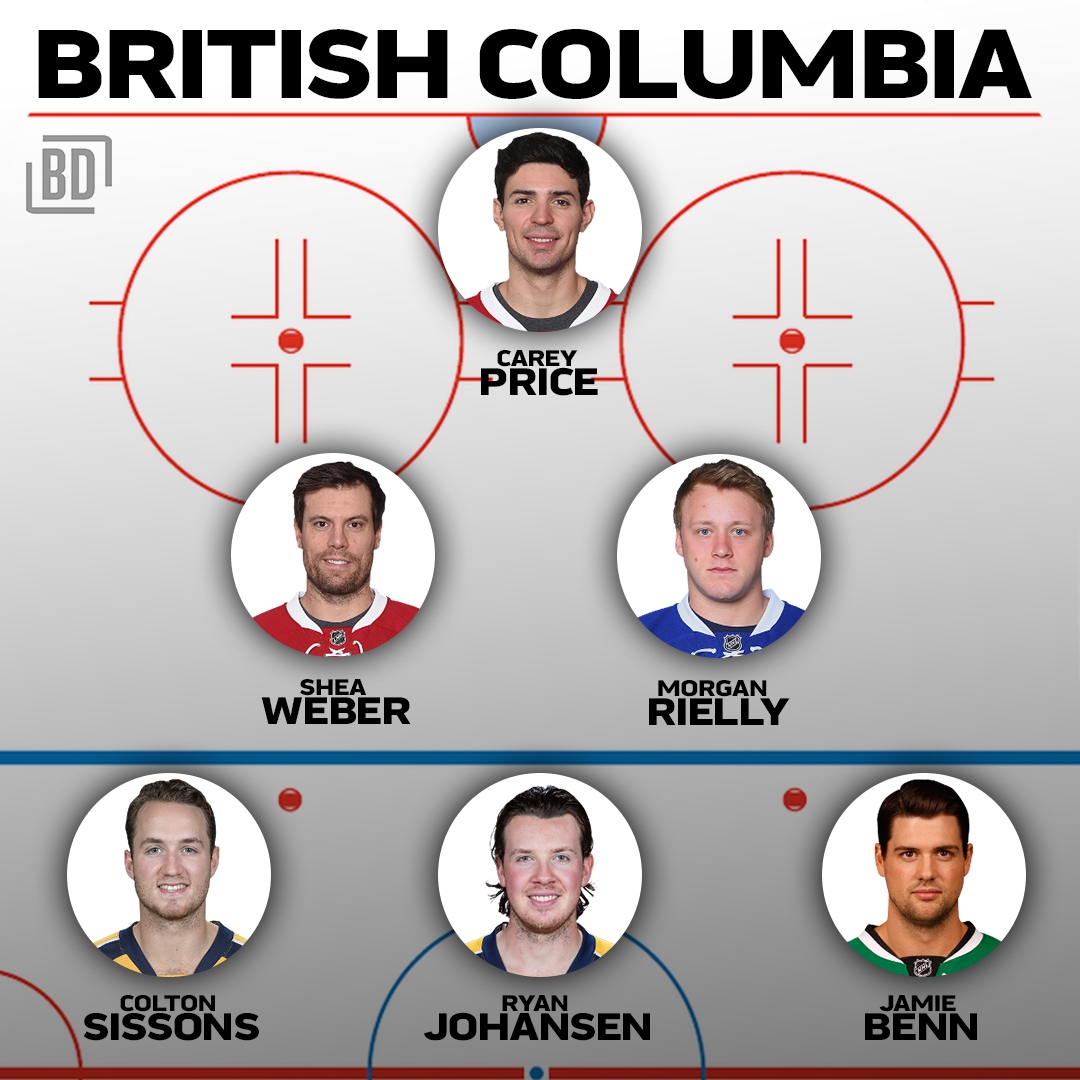 B.C. boasts a very well-balanced lineup consisting of size and skill. Jamie Benn has established himself as a hybrid who can play both center and on the wing, but he gets the move outside so RyJo can squeak in the middle. Sissons and Reilly are relatively weak, especially when you compare them to other eligible players such as forwards Kyle Turris and Andrew Ladd, and defencemen Justin Schultz, Tyson Barrie, and Brent Seabrook. However, each player was able to make the cut due to their natural position. Having Carey Price in net definitely makes up for it. 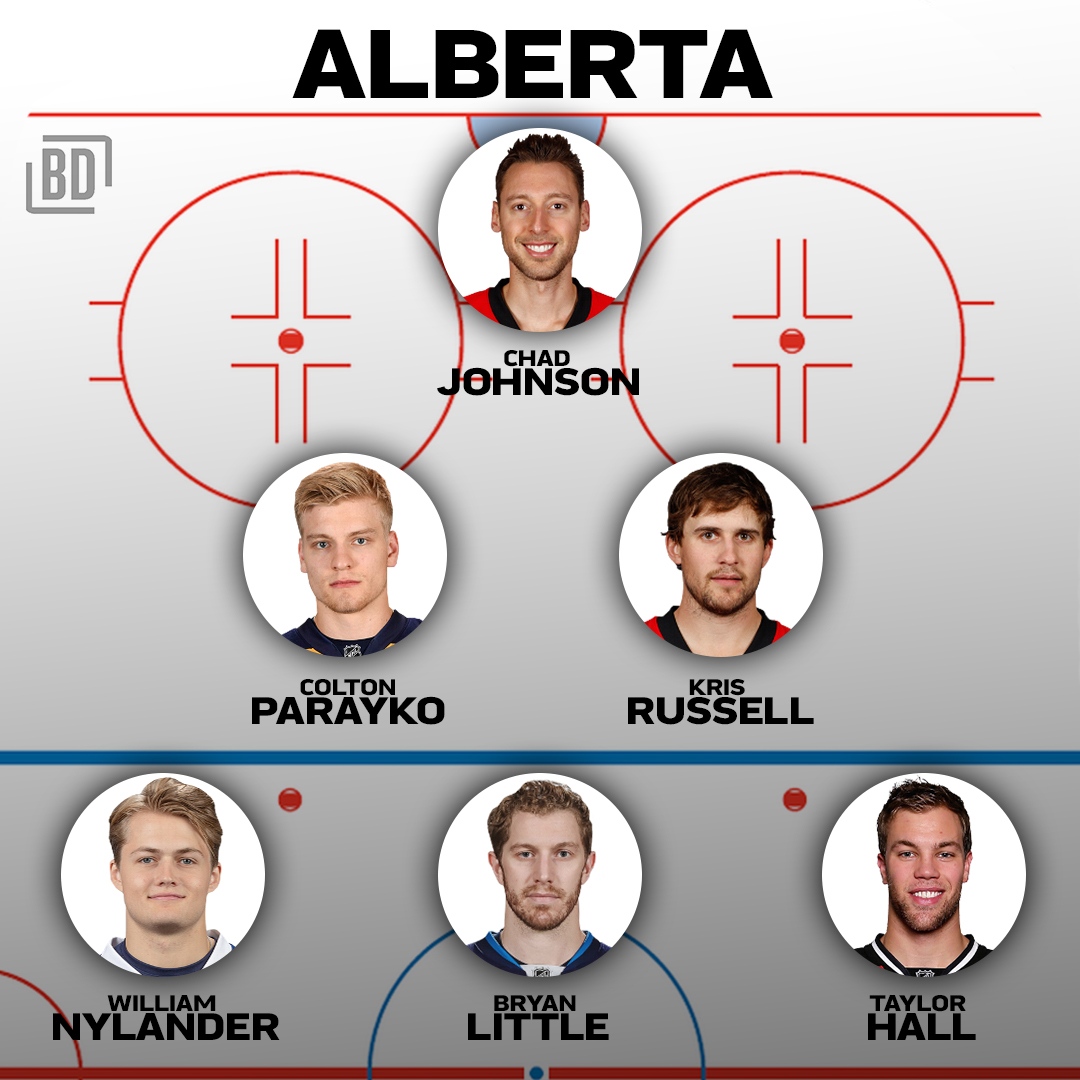 That’s right, Leafs rookie sensation William Nylander was actually born in Calgary (his dad Michael was once upon a time a Flame). He and Alberta native Taylor Hall form a fearsome duo on the wing, along with Winnipeg Jets center Bryan Little. In terms of skill, Little is a downgrade from his line-mates but is still a solid two-way center.

Monstrous defenceman Colton Parayko and shot-blocking maniac Kris Russell deserve their spot on the top line, although Dion Phaneuf and and Jay Boumeester each make a strong argument, too. Chad Johnson gets the call between the pipes by default, as he is the only goalie currently playing in the NHL that was born in Alberta. You’ll likely agree that he is the weakest starting net-minder of all the teams. 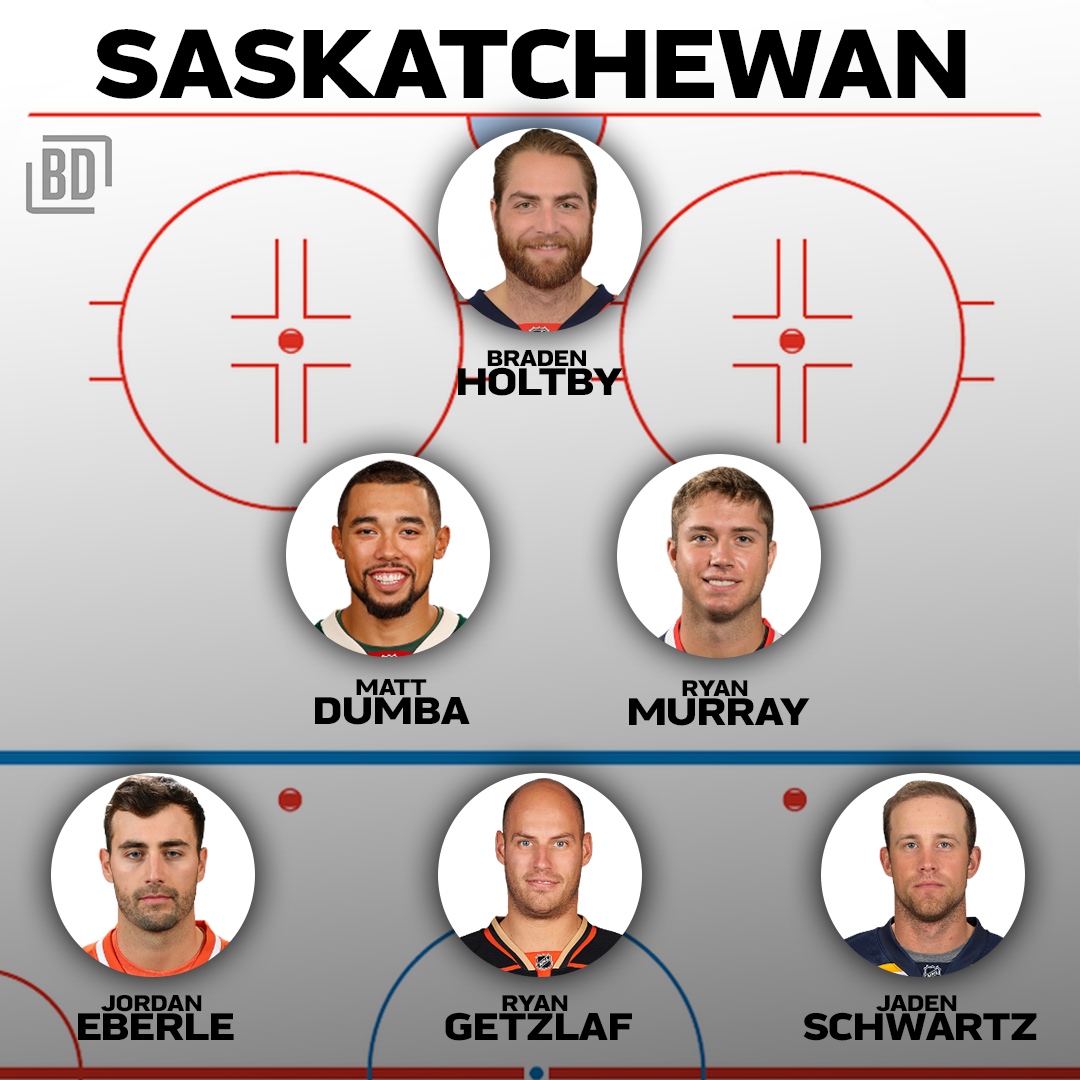 If only Saskatchewan could lend one of their goaltenders to Alberta.

Holtby ultimately gets the nod, but Dubnyk likely would have received it if the rosters were assembled this past December. Up front, Getzlaf, Eberle, and Schwartz make a formidable line that would do damage if given the chance to compete. There is an argument to be made that Marleau should be in Schwartz’s place, but the latter is entering his prime while the former is exiting his. Both players have been solid over the past few seasons.

The tandem of Murray and Dumba isn’t exactly eye-opening, but it will have to do. Murray, a former second-overall pick, has been riddled with injuries throughout his career and is somewhat unproven. Dumba, on the other hand, just had his best season yet and is capable of filling a big role.

An unbalanced lineup, but scary nonetheless. 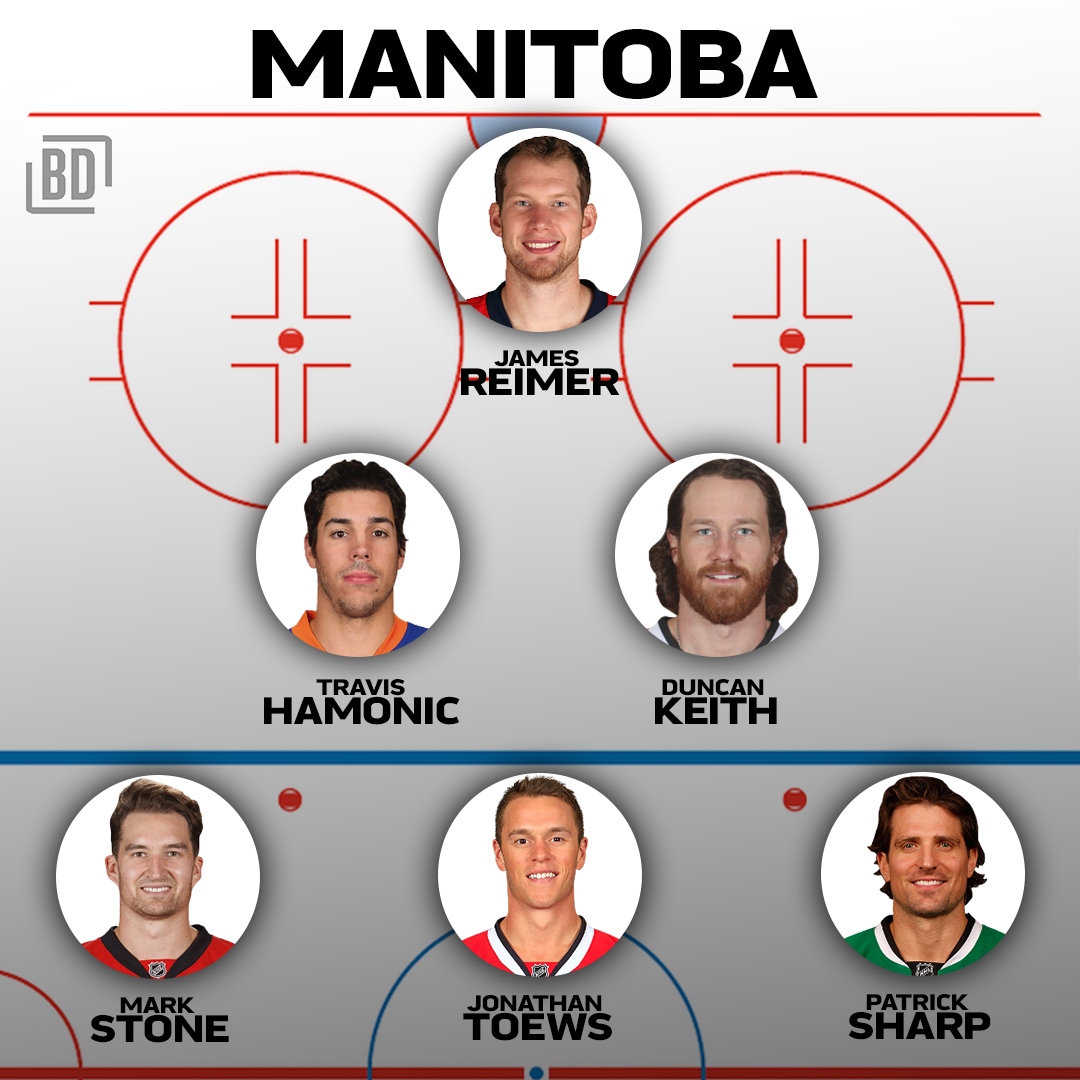 Some current/former Blackhawks make up a chunk of Manitoba’s line.

Up front, former teammates Jonathan Toews and Patrick Sharp are reunited to play alongside exuberant winger Mark Stone. Toews and Sharp won three Stanley Cups together in Chicago and have demonstrated chemistry in the past. The two with Stone comprise a very interesting line.

Former Conn Smythe winner Duncan Keith was recently named to the NHL’s top-100 players list and is undoubtedly a guy you want heading into battle. He and Hamonic form a very strong puck-moving pairing. Goaltending is Manitoba’s Achilles heel, but it’s not like Reimer is incapable of filling a starting role.

Slim pickings in Winnipeg, but their best is quite impressive. 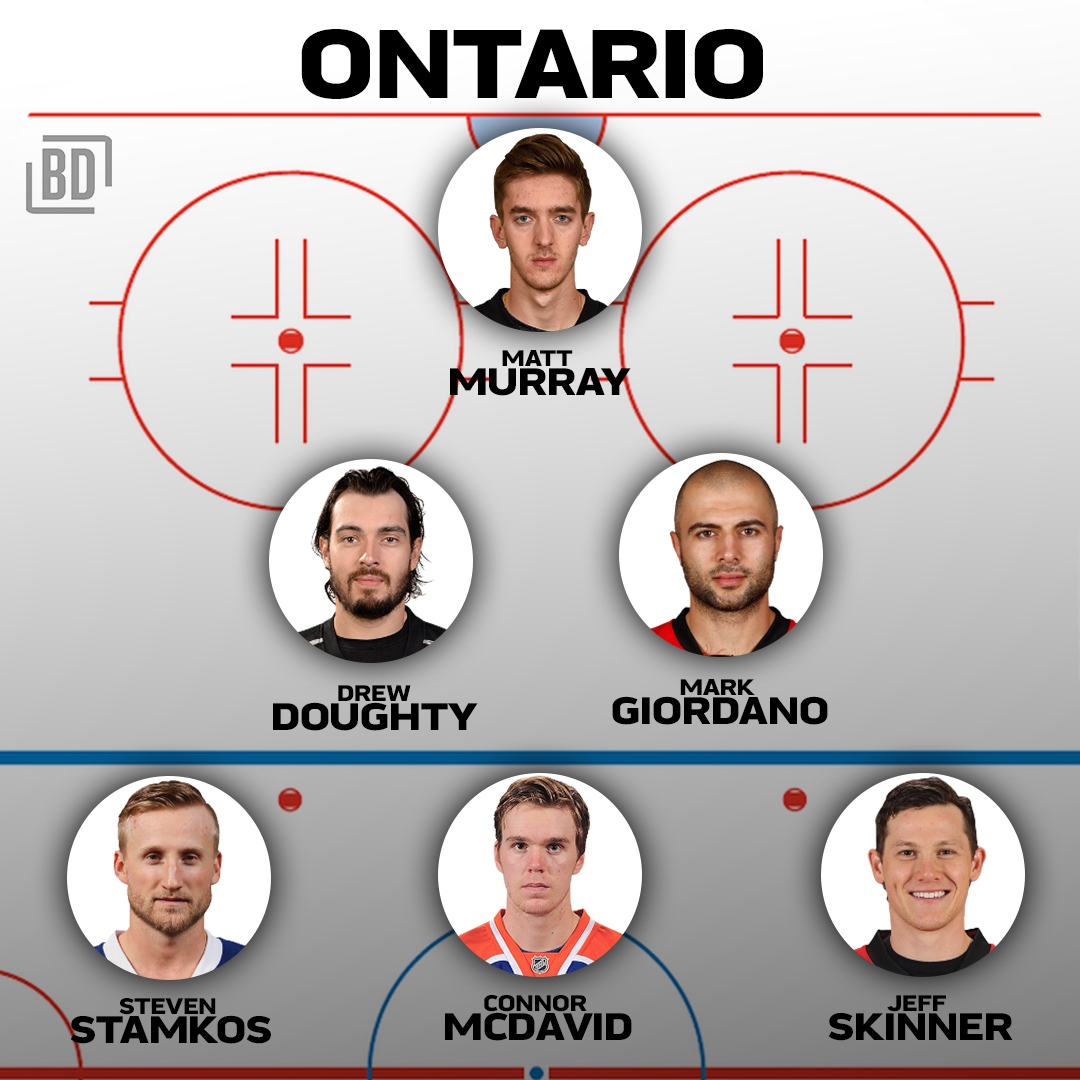 You can practically make your own league by strictly using players from Ontario.

It’s hard to imagine a guy like 2016-2017 Norris Trophy winner Brent Burns or electrifying P.K. Subban not cracking a provinces’ starting lineup, but that’s the case. Remember- Doughty is just one year removed from winning the Norris and is one of the most well-rounded players in the world. He is also the only one of the three with a Stanley Cup(s) to his name.

There is no shortage of centers from Ontario. John Tavares, Tyler Seguin, and Mark Scheifele are each franchise players in their own regard, but none of the three have anything on superstar forward Connor McDavid. Stamkos gets the go-ahead at the wing, as he has switched back-and-forth between there and center throughout his career.

Right wing is the only position where Ontario lacks depth (well, compared to the rest of their skaters). Jeff Skinner is a strong option and proved he is still one of the game’s elite scorers after putting home 37 goals last season.

Matt Murray gets the starting gig between the pipes after capturing his second Stanley Cup in as many years. Though an argument can also be made for Talbot after he recently posted a ridiculous 42-22-8 record.

This team is STACKED. 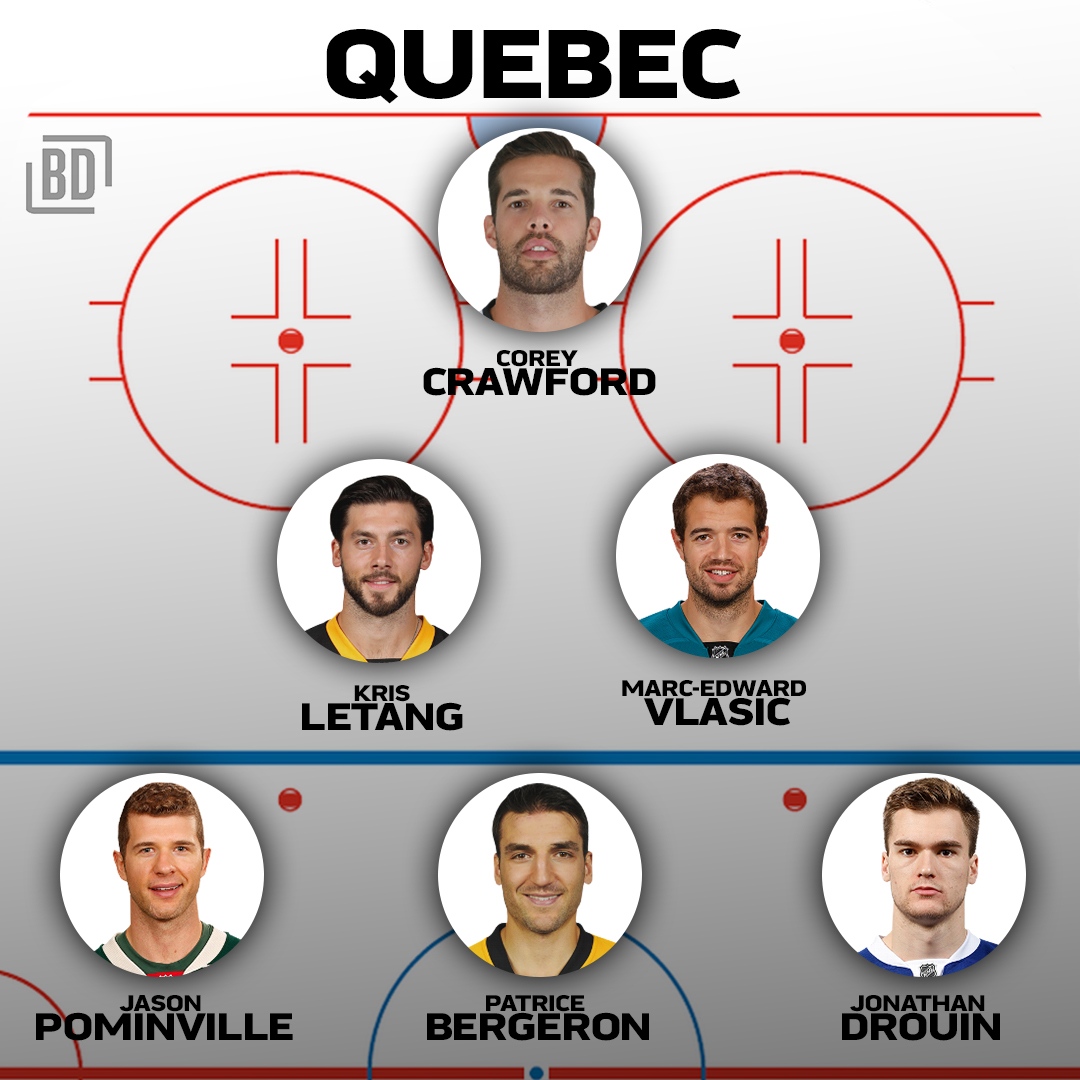 Similar to Ontario, the province lacks right wingers. We would love to see a player like Jonathan Huberdeau fill the role, and an argument can also be made that he should be in Drouin’s place on the left wing. But rules are rules and Pominville therefore makes the cut.

The province has three solid veterans to choose from in Fleury, Crawford and Luongo, but the Blackhawks tendy narrowly gets the job due to his Stanley Cup Pedigree and solid play over the past four seasons. Any of the three would really be a fine choice. 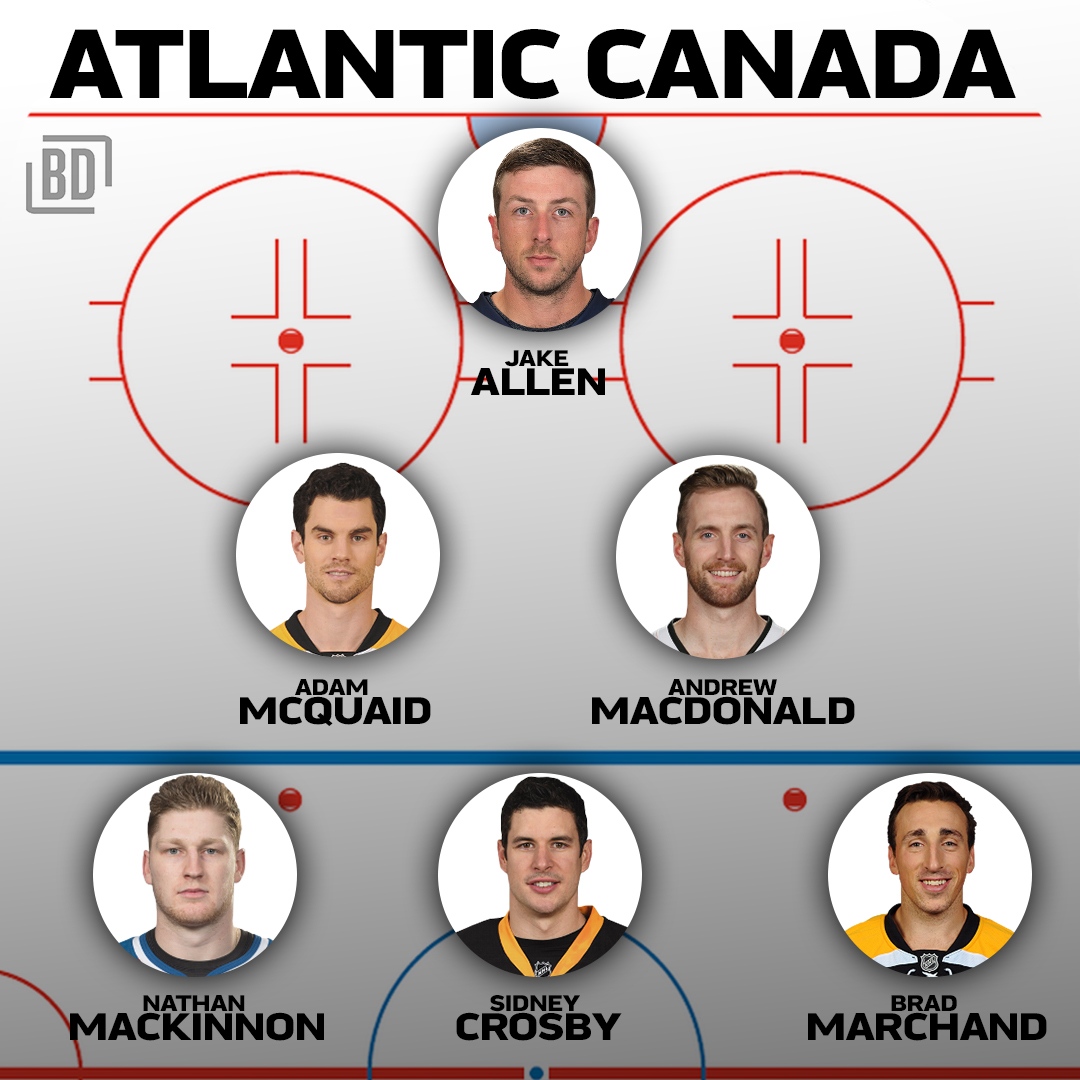 Okay, so MacKinnon has generally been used as a center. The 2013 first overall pick has spent time on the wing, and is allowed to slot in at the right side due to the Atlantic region’s anemic depth. MacKinnon, along with Crosby and Marchand make up the strongest forward group.

Defence is where the team takes a serious hit, where bruising defenceman Adam McQuaid and Andrew MacDonald lead the way. The pair is a clear step down from the others on the list, but is still serviceable.

Jake Allen emerged as a star during St. Louis’ 2017 postseason and is a solid option in goal. It’s not like it really mattered anyways, considering he’s the only goalie playing in the NHL from the Atlantic region.

Each starting lineup makes a strong case, but it’s the toughest to argue against Team Ontario. They simply don’t have a weakness and it wouldn’t be surprising if the entire lineup was chosen to represent Canada at the next World Cup of Hockey.

Though it’s unlikely to see a battle between provinces take place, it’s fun to imagine what a tournament would look like with each lineup competing against one another.