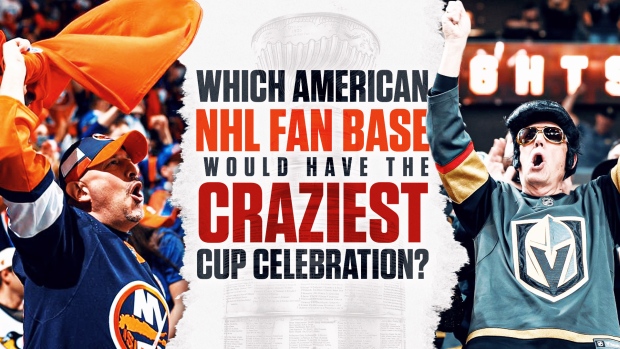 Since the Calgary Flames, Edmonton Oilers, and Ottawa Senators made the Final in consecutive years from 2004 through 2007 (with the lockout year in between), only two Canadian teams have made it to the end; the Vancouver Canucks in 2011, and the Montreal Canadiens last year.

The familiar all-American Final had us talking in the office about different American fan bases, and we ended up debating about which American franchise would have the craziest Cup celebration if their team were to win it all.

There were a LOT of opinions...

@bardown Which 🇺🇸 fan base would have the craziest Cup celebration? Let us know what you think: 👇 @bardown ♬ FEEL THE GROOVE - Queens Road, Fabian Graetz

There seems to be a few schools of thought when defining these opinions. On one side, there are some cities – like Philadelphia and Boston – have notoriously wild sports fans in general. Just look back to the Philadelphia Eagles Super Bowl victory, when it seemed like win or lose, the city of Philly was getting trashed.

In another school of thought, there are some markets with notably crazy hockey fans. Minnesota has been called the most Canadian state, while markets like Buffalo are constantly proving to be hockey-crazed even through the toughest of times – just look up the televisions ratings. https://www.bardown.com/sbj-releases-hockey-s-highest-and-lowest-us-market-tv-ratings-as-well-as-biggest-gain-and-decline-1.1067076

Finally, there are some wild card ideas: the New York Islanders have low-key a really crazy fan base, markets like Nashville, Carolina, and San Jose have exploded in recent years, and there are original six arguments to be made for franchises like the Blackhawks, Rangers, and Red Wings.

Who do you think? Leave a comment to let us know!

Which American fan base would have the wildest Stanley Cup celebration? 👀