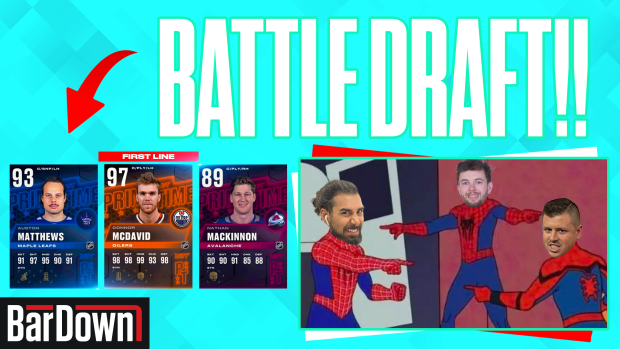 BarDownloadable is back with another NHL22 segment featuring Marissa in her familiar hosting position, along with Eric, Luca, and Corwin in the familiar drafting positions.

Each segment we make sure to scour through the YouTube comments to see what you (yes, YOU!) would like to see next. We've drafted the greatest team of all time, then we tried again with a budget (lol), and we've even drafted a three-manager team in which the other managers have no idea who has already been drafted.

Now we're adding a little competition into the mix.

For this edition, the three combatants will be competing to draft the best NHL22 team they can. They have no idea who the other managers have picked until the end when all the teams are revealed, and there were certainly some similarities between the squads.

"Put the water wings back in the car!"

What was supposed to be a competition video actually turned into a banding of brothers as the three managers quickly aligned to target 'Risser.

The rule for Risser was that if all three managers crafted playoff-bound teams, she would receive a punishment. Only fair, right?

Unfortunately for our trusty host, the Avs, Leafs, and Sens each earned a playoff spot on the back of hilariously similar seasons, and 'Risser is now awaiting her punishment.

If you have an idea for what she should do, hop into the comment section and let us know!

If nothing else, at least would you please "put 'er there, pal?"

Anyway, here's the three managers teaming up to draft a team blind.