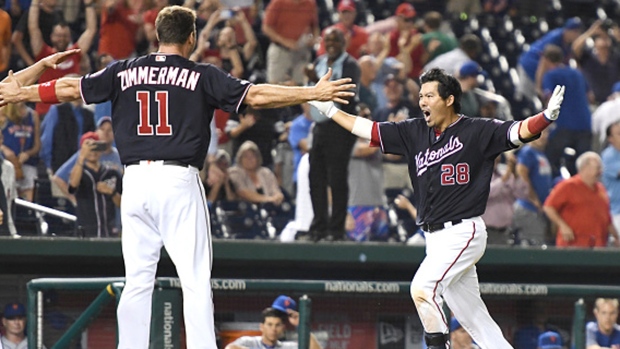 Mired in a playoff push in one of the most competitive Wild Card races ever, the Washington Nationals are doing just fine without Bryce Harper.

Occupying the first Wild Card spot in the National League, the Nats are a virtual lock to play in the Wild Card play-in game from October. One of the teams they're ahead of in the Wild Card standings is their divisional opponent, the New York Mets.

In their Tuesday night game, the Mets put up a five-spot over the Nats in the top of the ninth inning adding a sufficient amount of insurance runs to secure a win over the Nats, or so we thought.

But in on the bottom of the ninth, Washington pulled off one of the more spectacular comebacks we've seen in recent memory.

The Nats chipped away at the lead after Trea Turner scored Victor Robles. Anthony Rendon singled in a run home to make it 10-6. Fearing a late-game collapse, the Mets even brought in closer Edwin Diaz to try and close it out, but Ryan Zimmerman doubled with the bases juiced to make it 10-8.

Up next stepped Kurt Suzuki, and with runners on 2nd and 3rd, Suzuki's three-run dinger capped off quite the improbable come-from-behind victory that turned to be the largest deficit erased in club history.

KURT SUZUKI FOR THE WIN! #WALKOFF

Holy crap.
Nats down six to start the bottom of the ninth.
Score seven, including three-run walk off by Kurt Suzuki.

An all timer. I've seen hundreds of games in this stadium. Maybe one with an ending as crazy as that. Kurt Suzuki wins it for #Nats. Largest deficit overcome in a win in team history. That's insane.

Life as a Mets fan: pic.twitter.com/DPIjyhP5hs

The Mets entered the bottom of the ninth inning tonight with a 99.7 percent chance to win, according to Fangraphs calculations. They lost. pic.twitter.com/dGm4XUrM3w

They are the 1st team to allow 5+ runs in the top of the 9th only to score even more runs in the bottom half to walk off since the Red Sox on 6/18/1961 vs. Washington.

Everyone who bet the Mets tonight 🤬

Check out the reactions from Mets fans in this tweet below.