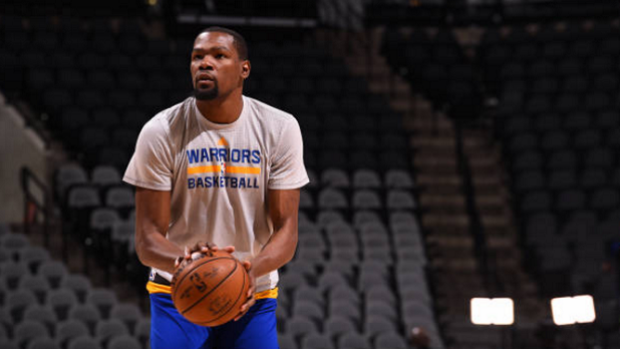 The Warriors have been on an absolute tear lately and the good news just keeps on coming. The day after Kyle Lowry returned to the lineup, it was announced that Kevin Durant is likely to return to the Warriors lineup this weekend.

If you watched any of last night’s Raptors game, you’ll know that Lowry had an immediate impact on the Raptors’ performance, but it’s inconceivable that the Warriors could get much better. The Warriors have won 13 straight games, are on top of the Western Conference again and have surged to the top of most power rankings around the world wide web.

So, obviously this has Warriors fans and fans of seeing peak basketball talent excited. Who it doesn’t have excited is anyone rooting for a team in direct competition with Golden State.

Warriors have won 13 in a row, and now get Kevin Durant back ... good grief.

Clinched the #1 seed and Durant coming back Saturday pic.twitter.com/Ug6m7s9WHr

Kevin Durant to ESPN this week on being out this long: "This s--- killing me. I don't sit, I'm a hooper." Worked his way all the way back.

Kevin Durant *and* Harry Kane coming back ahead of schedule? pic.twitter.com/99bD13YTzP

Durant back everyone in the NBA shook rn...

Kevin Durant has been cleared to fully practice and will return Saturday against Pelicans barring a setback. pic.twitter.com/j0Hywmtnzs

Of course, those all seem like reasonable reactions. Some excited, some not excited, but then we can’t help but look back at this lightning-hot take from Skip Bayless.

Hurry back, Kevin Durant. You're the Spurs' only hope.

While we disagree with Bayless’s assessment here, we have to assume he’s working from the assumption that with the way the Warriors are currently play, the only way to go is down.