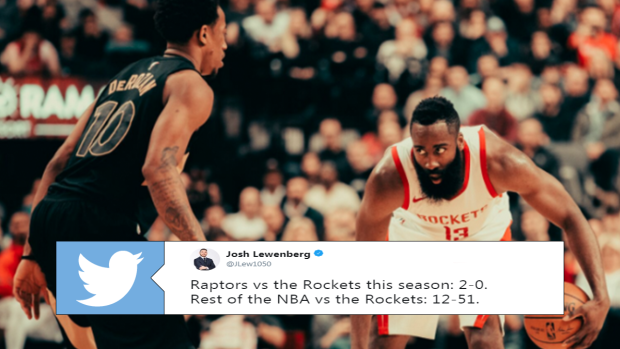 If it wasn’t official already, it is now: The Toronto Raptors are legitimate contenders for the NBA Championship.

The Raps defeated the Houston Rockets 108-105 at home during Friday’s “Welcome Toronto” night.

With the big win over the Western Conference leading Rockets, the Raptors extended their winning streak to seven games. They sit with a 2.5 lead over the Celtics for first place in the East after winning 14-of-15 games.

DeMar DeRozan and Kyle Lowry combined for 53 points in the win to push the Raptors to a league best 28-5 on home court.

Here’s some of the best reaction from around the basketball world and the internet.

Look who was giving it to Trevor Ariza before the final play of the game. 👀👀 . #6ixman @champagnepapi. #WeTheNorth . (🎥 Via: Bleacher Report from AT&T Sports South West)

Do you need any more convincing, Toronto? Say it out loud, altogether: The Toronto Raptors are NBA Championship contenders. #WeTheNorth

That was a terrific game between 2 of the 3 elite teams in the league.

Raptors, Rockets & Warriors are simply in a class by themselves.

Raptors are no joke. BIG win against the Rockets.

Drake predicted that the Raptors would end the Rockets 17 game win streak... and they did. 👀 pic.twitter.com/pHFV7tTUeW

The Raptors are currently the best team in the NBA — they snap Houston’s 17 game win streak. #WeTheNorth

The Rockets’ 17-game win streak ends with a 108-105 loss at Toronto. Respect to James Harden and the flying Rockets on their long win streak. Don’t sleep on the Raptors either. The Warriors take lead in West with win at Portland tonight.

HELL OF A GAME.

Im calling it RAPTORS WILL MAKE THE FINALS

"The Toronto Raptors are going to win the Eastern Conference."

That was a Great team win! #WetheNorth

Look who was giving it to Trevor Ariza before the final play of the game. 👀👀 . #6ixman @champagnepapi. #WeTheNorth . (🎥 Via: @BleacherReport)