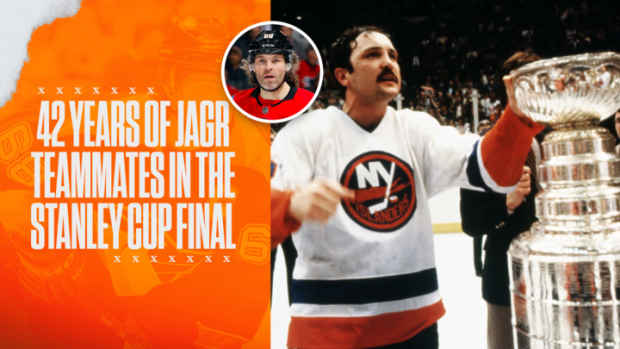 Jaromir Jagr is the owner of all kinds of long, long streaks. That’s what happens when you play for, like, 100 years.

Okay, so his NHL career actually spanned from his rookie season of 1990-91 until 2017-18, with a few years overseas in between. That’s still a ridiculously long time to play top level hockey, and unlike some other longtime NHLers, he did it with a ton of different teams.

Jagr played for *takes a deep breath* the Penguins, Capitals, Rangers, Flyers, Stars, Bruins, Devils, Panthers, and Flames. We don’t have the exact number for how many teammates Jagr has had in his career, but we can certainly put it into perspective for you.

2022 marks the end of a streak that clearly showcases just how much Jagr’s presence was felt in the NHL. For the first time since 1979, the Stanley Cup Final will not include a player that has at some point been a teammate of Jagr. Stretching back to Bryan Trottier in 1980, every single Final has featured a Jagr teammate.

Perhaps even more ridiculously, only two of those years (1986 and 2021) did the WINNING team not feature a Jagr teammate.

One of the NHL's most incredible streaks has come to an end.

This year's #StanleyCup Final will be the first time in 40+ years to not feature a teammate of Jaromir Jagr (@68Jagr). 🤯

While Jagr’s legacy is indestructible, it’s a little sad to see such a fun streak come to an end – particularly with so many former Jagr teammates still in the league.

We can kill this stat on an "NHL teammate" technicality or we can have some fun and put 2022 on the list.

Ondrej Palat was a 2014 teammate of Jaromir Jagr on the Czech Olympic team. pic.twitter.com/d82d5Q8pyL

Regardless, Jagr will forever have a place in our hearts – especially Mullet Jagr.