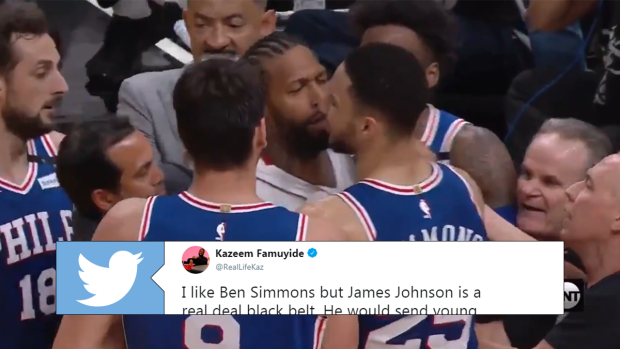 James Johnson and Ben Simmons , via Kenny Ducey on Twitter

Saturday's Game 4 between the Philadelphia 76ers and Miami Heat has been a feisty one, with all kinds of mania sprouting from wild turnovers, hard fouls and in-game skirmishes. In one dust-up, Josh Richardson and Justise Winslow were both sent to the Heat locker room, with the latter getting bloodied over the left eye and requiring stitches, and that wasn't even the wildest thing happening at that moment!

While Richardson and Winslow found themselves on the floor after a loose ball, Philadelphia's Ben Simmons and Miami's James Johnson found themselves tangled up with each other after Robert Covington fouled Goran Dragic on a breakaway. Yes, a lot was going on:

The thing is, James Johnson holds a second-degree black belt in karate, and he's also undefeated in seven MMA matches as well as 20 kickboxing matches. In one notable anecdote retold to Grantland, former teammates from Johnson's first stint with the Toronto Raptors talked about the time he hit rim with a spinning heel kick. Basically, he isn't the guy you want to try anything with.

One really compelling subplot in the Heat/Sixers series is various guys on the Sixers kind of gamely pretending that they want it with James Johnson, which they surely, surely do not.

Ben Simmons after the game when James Johnson confronts him: pic.twitter.com/neS2g3yd5g

I'd take James Johnson vs them all

Quick note for everyone on the Sixers re: James Johnson, there is an inverse relationship between how tattooed someone's neck is and how much you should want to fight them.

In the span of an NBA quarter, James Johnson somehow managed to expose the entire Sixers team as fake tough guys. Incredible.

Miami’s James Johnson has 7 ko’s in his pro MMA career...His Dad and Mom and siblings all have black belts in martial arts...he ain’t the one to mess with💯

James Johnson is the last person you want to fight in the entire NBA.

I like Ben Simmons but James Johnson is a real deal black belt. He would send young Benjamin to the Lord. https://t.co/KD2MCmaQI4

I love Ben Simmons, but he absolutely does not want that smoke with James Johnson. Under no circumstances.

The Sixers are too young to know not to mess with James Johnson.

Opponents I would not want to fight, ranked: