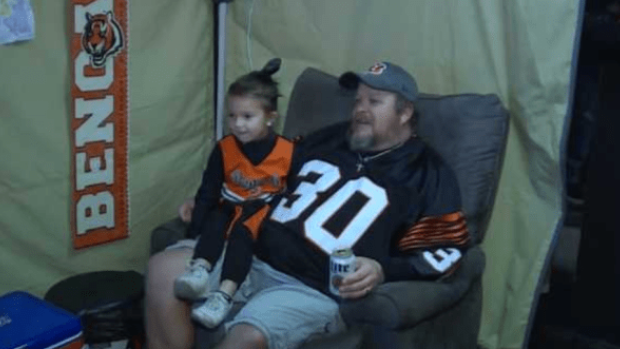 Week 13 in the NFL was the day of the underdogs, as the Dolphins and Redskins both came away victorious.

But more importantly, the Cincinnati Bengals are no longer winless, and now sit an optimistic 1-11 on the season!

Luckily for one Bengals fan, he's now allowed to go inside his home and see his family again. If you haven't heard of Jeff Lanham, meet him, because, like shorts guys in Winnipeg, he's committed to seeing his team win at the expense of his own well-being.

Since Week 5 of the season (October 6th), Lanham has stayed atop of the restaurant's roof for two months, but can finally come down now after the Bengals beat the Jets 22-6.

Update: Bengals fan Jeff Lanham living on the roof of his restaurant until the team wins a game, spent Thanksgiving with his family...ON THE ROOF. Told me if Bengals don’t win a game he’ll come down when season is over, and go back up week 1 next year. He’s been up there 54 days pic.twitter.com/1KkiAB7yr7

Lanham pledged he would stay up there until the end of the season and would've gone back up for Week 1 next year had the Bengals not won a game this season. You got to hand it to him for keeping his word, as he spent 57 cold, wintery days up there total.

But for now, he can return to running the Hog Rock Cafe with hopefully some increase revenues given the publicity.

"I'm so ready to come down; it's miserable up here," Lanham said to CBS on Thanksgiving. "I did not plan on being up here this long. This definitely wasn't no business move, I can tell you that. The only reason I'm even up here is to silence the haters' mouths. I never want anyone to be able to say that I wasn't a man of my word."

Now the question becomes, did anyone film his day-to-day interactions up there and document the progression of the rooftop? After all, it did look like a pretty sweet hangout spot...if it were summer that is.

You can beat he has a soft spot for the New York Jets now.

Thanks to the Jets, this Bengals fan is going to be able to sleep inside again pic.twitter.com/zSAZHOwKTZ