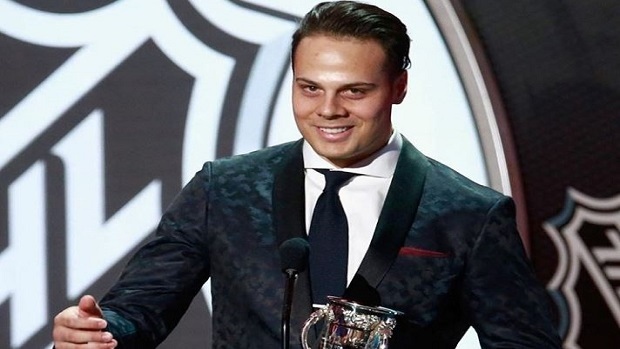 It’s no secret that hockey players are a pretty specific type of people.

These guys seem to be mass-produced to look pretty much the same. Away from the arena, they can be spotted wearing athletic shirts and long hair pushed back underneath a snapback. At the arena, save a few missing teeth, they are consistently very well, but generically dressed.

The addition of the occasional toque, scarf, or a sharp pea coat is usually the extent to which NHL players are known to ‘think outside the box’. While the NFL and the NBA have let up on their dress code and now allow their players to exhibit their personalities through fashion and style, the NHL still has a staunch set of standards that limit its players’ abilities to express themselves. The rule in question reads: "Players are required to wear jackets, ties and dress pants to all Club games and while traveling to and from such games, unless otherwise specified by the Head Coach or General Manager."

Players on pro teams, junior teams, and even lots of minor hockey teams have been conditioned to wear the traditional suit and tie to team sanctioned events in order to drive home the mentality that they’re a well put together, completely cohesive unit. Whether this philosophy is effective or not, it definitely doesn’t allow a lot of room for creativity or originality.

But, the league has changed a lot in the past few years.

The game has sped up exponentially, size no longer dictates the success of player’s careers, and new and exciting characters in the league that don’t conform to general ‘hockey player’ stereotypes have created an atmosphere in which individual personalities can breathe and develop.

While there are some omissions, and the creation of personal brands and styles in the league are most definitely on the rise, the following is a curation of our picks for the 10 most stylish players in the NHL.

We’re going to forgive him for his excessive use of camo for his strong game in the evening wear department. Through it would have been hard to look bad while absolutely cleaning up at the 2015 NHL Awards, when he won the Hart Trophy, Vezina Trophy, and Ted Lindsay Award, he added a shiny and textured black suit. Price finished the look with a black bowtie just to confirm his rockstar status. He continued the trend of sharp and eye catching suits at the same event two years later, when he dropped the bowtie, but donned a dark green jacket. 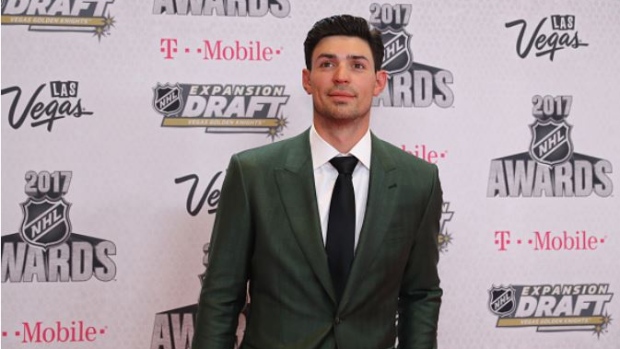 The King has been reigning for 14 NHL seasons now, and since the beginning he’s been a cornerstone in league-wide fashion. The Rangers goalie has graced Vanity Fair’s ‘Best Dressed’ list, and is seen here sporting three beautiful variations of the plaid suit. Paired with a black tie and shoes, or more uniquely with the orange tie, Henrik’s sense of style, a lot like the player himself, is timeless and classic.

He’s got skills on the ice and style off of it! pic.twitter.com/Rq9YCGh6po 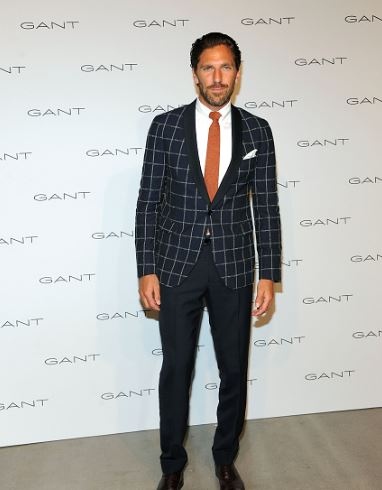 Though Seguin admittedly conforms to pretty much all hockey player stereotypes, and has called himself “a hockey player through and through”, he still looks pretty slick and original when he gets to the rink. We loved this look from the 2018/2019 home opener in Dallas, went he went all in with the three-piece suit and gold accents. We’re also big fans of the maroon suit and the omission of a tie.

Kane is the epitome of original aesthetic in hockey. Back when he was a Winnipeg Jet in 2015, he was actually scratched from a game for not adhering to the team’s dress code, when he wore a tracksuit to the rink. We, however, love his original looks, from the cheetah suit, to the pink one he wore for ‘Hockey Fights Cancer’. We also completely get why Erik Karlsson is looking at him with such awe and admiration in his three piece white suit and bowtie.

When I heard Evander Kane was benched for a dress code violation I thought it was for this suit not a track suit. pic.twitter.com/WtdF4u16V0

I normally loathe white suits but man does Evander Kane pull is this off. pic.twitter.com/ACypFW0owa

One of the more trendsetting players to grace our list, Barzal doesn’t just have great gameday style, but has also gotten the nod from the New York Times for his impeccable street style. That's not downplaying his suit game, though, because his fits are some of the sleekest in the league.

Well, the kid's officially made the big time: #Isles Barzal gets a write-up in the NY Times Style section. "Saint Laurent is becoming my favorite brand." https://t.co/QdcPgRXEB7 pic.twitter.com/7yJmEqujBy 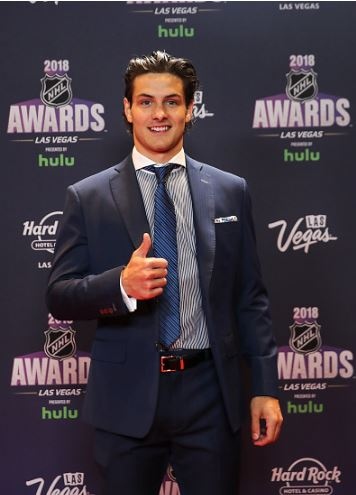 I opened Instagram and was not prepared for Erik Karlsson in a suit with a man bun pic.twitter.com/MNP3PxYn3m 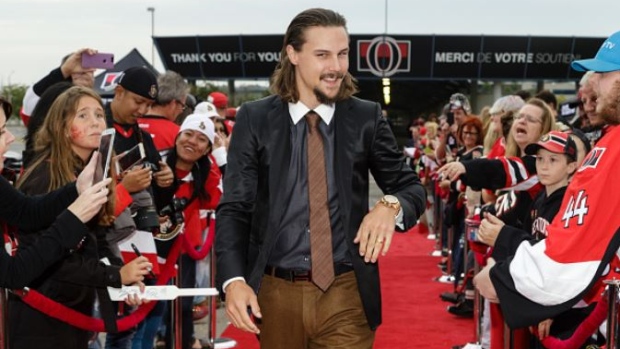 When it comes to personality, Burns has it seeping out of his pores. Though his fashion choices aren’t always things we plan on using for our Saturday night inspiration, we love how authentically himself Burnzie is, and how he pulls of these unusual looks with incredible ease.

No one suits Brent Burns like Domenico Vacca, the NHL's tireless tailor (by @alex_prewitt) https://t.co/1yfeCapw8b pic.twitter.com/e8bDZTUaAw

Two words: Goyard suitcase. Actually, four words: Goyard suitcase, crocodile backpack. Chychrun has been a prominent face in hockey since his junior days with Sarnia, and has grown as a one of the most consistently stylish players in the league. We’re huge fans of his unique suits and swanky accessories, as well as his willingness to go ‘full send’ and leave the controversial extra button undone. 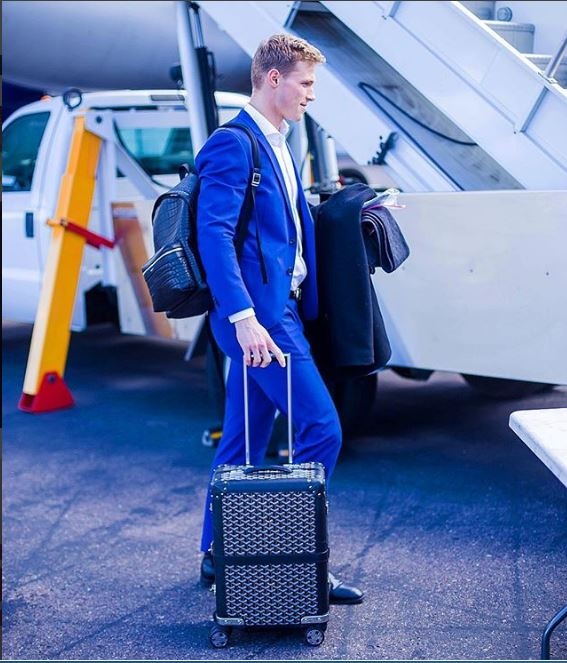 Over the past year, Matthews, who was quiet in his rookie year, has developed into one of the most interesting personalities in the NHL. In addition being the only Auston pretty much ever to spell his name with an ‘o’ instead of an ‘i’, and the fact that he’s changing the face of Maple Leafs history on the ice, it’s come to light that he’s a pretty unique guy in more ways than we expected. He recently made his mark in the fashion world, posing for GQ and Sharp Magazines respectively. The young Leafs superstar has become widely known for his incredible eye for fashion. Some of our favourite of Matthews’ looks are the iconic maroon suit, sans tie, with the Gucci loafers, and when he and Mitch Marner showed up to the rink looking like movie stars from the 1920s. Unreal. We’d also like to acknowledge his consistent and bold lack of socks in the unforgiving Ontario climate.

king of fashion, king of toronto, king of snipes, king of cellys, auston matthews is the king of everything pic.twitter.com/AGmLTFxJzP 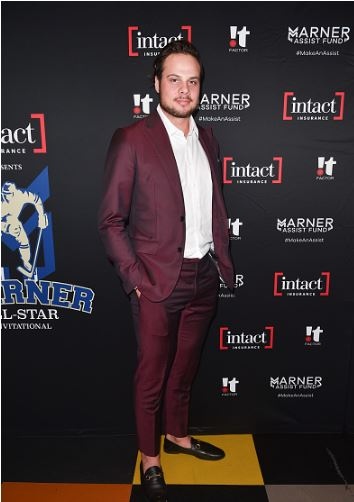 Honestly, this one was a no-brainer. Since P.K. came into the league in 2010, the fiery blueliner has set a new standard for style and authenticity for NHL players. We love his unparalleled ability to accessorize with hats, watches, and fur trimmed coats, as well as his seamless incorporation of patterns and colours. P.K. is a shutdown defenseman, a stand-up guy, and the best dressed in the NHL.

P.K. Subban may have the freshest style ever and I am LIVING. pic.twitter.com/2dyJuqv1XD

10) P.K. Subban: Blueline Buddies, pledged 10 MILLION DOLLARS to Montreal Children’s hospital!!!!!! Gets booed by Canadian fans,,,, and let’s be honest we all know why 👀 FASHION ICOOON!!!!! ELITE DEFENSEMAN!!!! Looks better in a Nashville uniform, Montreal lost that trade too pic.twitter.com/DoIUbnCy4v