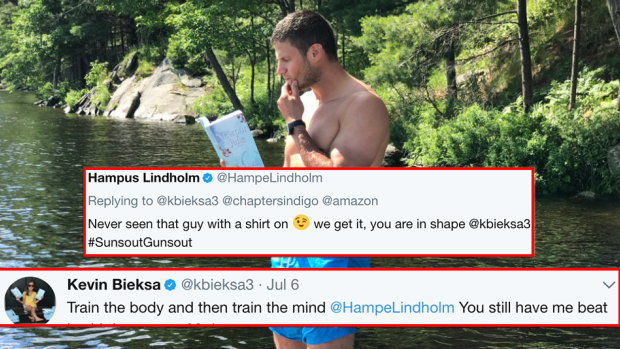 The offseason is the perfect time for NHL players to enjoy the beautiful summer weather before hockey seasons rolls around again.

Usually, when the sun is out, the "guns" come out, too, and there's nothing wrong with that because it is summer.

That said, Hampus Lindholm of the Ducks couldn't help but chirp his teammate Kevin Bieksa for this picture he posted on Twitter.

Never seen that guy with a shirt on 😉 we get it, you are in shape @kbieksa3 #SunsoutGunsout

Bieksa turned 36 less than a month ago and is outstanding shape by the looks of it.

He's also very entertaining on Twitter and proved that once again by firing back at Lindholm.

Train the body and then train the mind @HampeLindholm You still have me beat in shirtless posts 23-1.... https://t.co/SA98mwy0I9

Ladies and gentleman, the proof is in the pudding.

Finally back in🇸🇪 I'm gonna miss the Cali sun a bit but see you all in a month and a half or so!! #I #just #like #to #smile #smiling's #my #favorite

A shout-out to Google, Wikipedia and whoever invented copy and paste for helping this guy trough high school! Congratulations Stosie👨🏼‍🎓Great weekend with family and friends. And happy fathers day to all the dads especially mine back in🇸🇪

Life is too short, so smile while you still have teeth👏🏻 #smilingismyfavorite #minearealmostintact 😂

•Shot •Swear •Try to find the puck •Repeat Hopefully i can hit the net next year too!! best way to tan🙏🏻 #neighboorsarenthappy

It's all in good fun, but Bieksa is up 1-0 on Lindholm in social media confrontations.