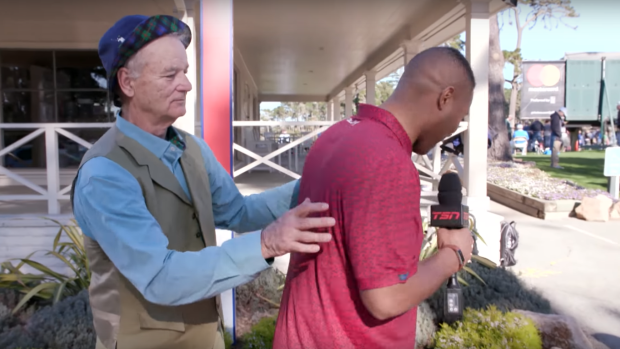 Bill Murray is an legendary comedian and he’s one of the hardest men to track down in Hollywood.

You won’t see him in interviews very often, so when you do, you know it’s special. Murray is more likely to be found at a college basketball game, at a Cubs game or on a golf course. Cabbie has been trying to hunt him down, so he went with one of his three homes away from home and was able to track him down at the Pebble Beach golf course.

They had a lot to discuss, including Cabbie’s modelling career, Bill Murray’s hip-hop presence and just his generally mysterious nature.

If you’re not aware of Murray’s golf clothing line, it’s classic Bill Murray. First off, as Cabbie mentioned in the video, he’s his classic batflip-like logo, but the real winners are the bell bottoms that Murray debuted this year.

Murray will never stop being a sports legend even if just for his appearance in Space Jam.

However, Cabbie does think that Uncle Drew could overtake Space Jam for the cult classic sports movie, so hopefully Murray makes an appearance in that as well. He would fit in perfectly dunking on people much younger than him.

@mr1loveto and @therealcabbie sit down at @pick6ixto to discuss traveling back in time to specific sporting events and concerts, the new Uncle Drew movie and more on 6IX DEGREES.