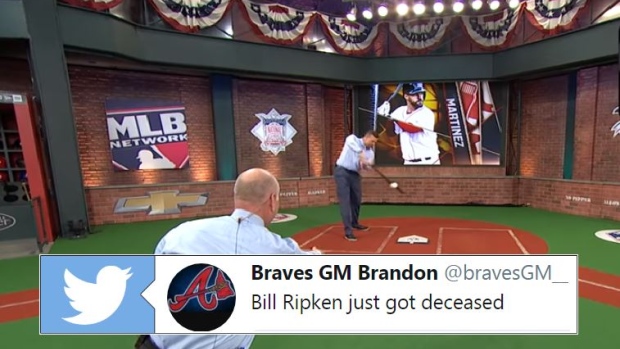 For the most part, baseball is a sport that you don’t have to worry too much about dangerous injuries. While pulled hamstrings and even serious injuries like Tommy John-inducing elbow ailments are fairly common in the sport, they wouldn’t necessarily be considered dangerous. Especially not in comparison to some contact sports such as hockey or football that can really leave lasting effects.

That’s not to say that baseball is danger free, however. In fact one of the more dangerous occurrences in sport can come from baseball.

How about baseball analysts though?

Bill Ripken, Cal Ripken Jr’s younger brother who also played 12 years of Major League Baseball, may not have had this liability included in his contract, but he felt the full effects when fellow analyst Sean Casey smashed a line drive right into his unsuspecting face.

Yikes. To be completely honest, the former MLBer they call Billy the Kid took that like an absolute champ. Screaming line drives can do a lot of damage if they hit a pitcher in the wrong way, just ask JA Happ or Matt Shoemaker.

Now that we know he’s alright, can we talk about how ironic it is that Casey literally said “you’re safe” after successfully hitting the first pitch towards the third base side, moments before hitting one right at Ripken’s melon? How about that Ripken kept tossing them to Casey despite just being hit, and almost got hit again as a result?

What a strange segment.