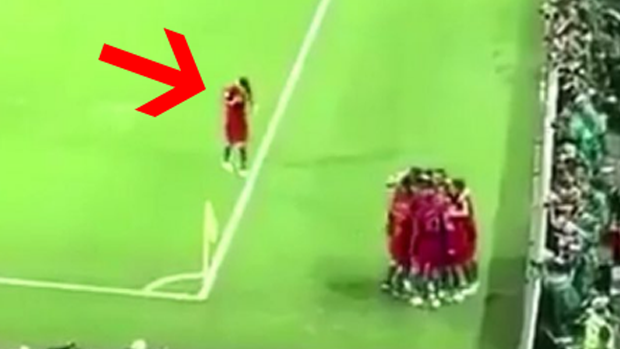 If you’ve been watching the World Cup so far, you probably know that one of the most thrilling moments so far was Cristiano Ronaldo’s free-kick goal to give him a hat trick and his team a tie.

All Portugal fans celebrated like crazy and so did the players… except for one. While the celebration was happening, you can see Portugal teammates to instruct one player from their side to stay on the pitch while the rest of the team celebrates. That caused some fans to realize what the loophole they were trying to fall victim to was.

During Cristiano’s hat-trick celebration, all of the Portuguese players were celebrating with him except for one who had to stay inside the pitch as FIFA states if all are off the pitch during celebrations, the opposing team can kickoff the game. 🇵🇹🔥 pic.twitter.com/EMjQlkocKc

One Portuguese player asking the last outfielder on the pitch to stay inside. 👍 pic.twitter.com/jGRxqLpvIh

Here’s where things get tricky, because the rule as that Twitter user stated it is not actually in the FIFA rule/law book. Where it may apply is on the rules of the kick-off. The law states that all players must be on their own half before the kick-off happens. So, with the goal-keeper still in his own half, fans are assuming that Spain would have been able to kick-off if all the other players were off the pitch, because while they aren’t necessarily in their own half, they aren’t in their opponents either.

For the game to restart, all players must be in their own half, therefore leaving one player in the opponents half while celebrating outside ensures the game doesn't restart...if they were all outside, a loophole for rule two is created pic.twitter.com/IlRBzrDcHt

We’ve yet to see anything like that play out in a real game, but it was clear that the team was aware of the rule – it will be interesting to see if other teams are aware as well.