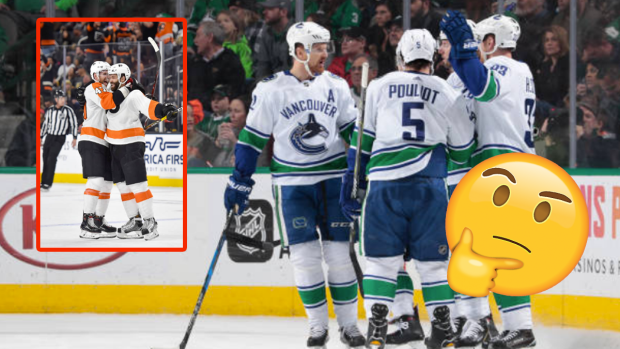 Everyone always talks about home ice advantage and how it’s supposed to help provide an edge. The crowd is on your side, you get to dress in your own locker room and sleep in your own bed, and you get other small advantages like choosing whether to go first or second in the shootout. It is by no means a guaranteed win, however, and Sunday was certainly an indication of that.

On Sunday, 18 teams squared off in nine matches. In all nine matches, the road team won. Seriously, is there a full moon or something?

This bizarre occurrence is extremely unlikely for a number of reasons, including the fact that according to MoneyPuck.com the 2018 NHL already sees the road team at a disadvantage of around 45% odds before record, injuries, and other individual team factors come into play.

All 9 road teams won Sunday. With road teams usually winning ~45% of games, a day like this should happen less than 1 in 1,000 times. pic.twitter.com/KxKlo1mWhY

This ridiculously small percentage of 0.0757% shows the likeliness of this event occurring, which works out to approximately 1 in every 1,321 times that nine games happen would the road team win all of them at a 45% chance of winning each game.

That’s impossibly small, but it gets even weirder.

More than half of those games were won by the team sitting lower in the overall standings. The Red Wings upset the Capitals, the Penguins topped the mighty Blues, the Rangers beat the high–flying Jets, the lowly Canucks shutout the Stars, and the Flyers beat the surprisingly dominant Golden Knights. That’s five fairly substantial upsets (one could argue that the Penguins/Blues matchup could be considered the exception) WHILE playing on the road.

If you take the differential in points for each of the games, winner over loser, it looks even stranger.

So not only was it unlikely that the road team would win in general, the home teams in more than half the games were actually favoured even if you eliminated the calculated home ice advantage. Other than the Pittsburgh/St. Louis matchup, the home team was heavily favoured in these five matchups.

While it is extremely difficult to calculate the exact odds once all factors are taken into account, these surface calculations should help to summarize what was an extremely bizarre and unlikely night in the NHL.