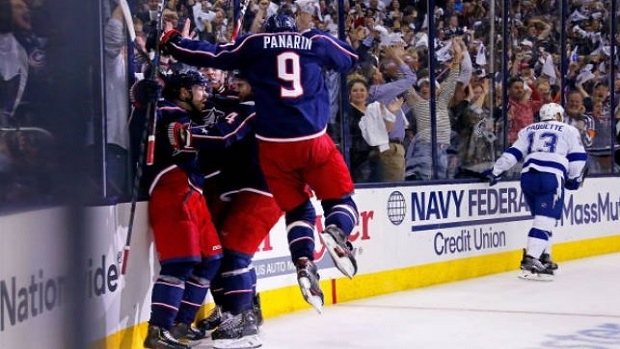 The Columbus Blue Jackets shocked the hockey world on Tuesday as they made history by sweeping the Tampa Bay Lightning in the opening round of the playoffs.

The Columbus Blue Jackets are moving on after sweeping the Tampa Bay Lightning in the opening round of the NHL playoffs! pic.twitter.com/iRtVCGNcBk

Tampa Bay were the Stanley Cup favourites all season long after, especially after becoming just the third team to win 60 or more games and just the second team to win 62 games, but the playoffs are a different beast and the Blue Jackets showed that in all four games of the series.

The Lightning are going home without a single win in the playoffs 😳 pic.twitter.com/Ebi1bhc8gy

A #StanleyCup narrative has been slayed: Sergei Bobrovsky can’t win in the playoffs. Swept #tblighning with .932 series SV% - and was nearly flawless (100/105 for .952) after Bolts’ third goal in first period of Game 1.

You’re back on the case, Bobrovsky! The @BlueJacketsNHL complete the sweep!!! 🧹🧹🧹 #JayAndDan pic.twitter.com/bQm1WXrZce

Huge Respect for #CBJ GM @jkekalainen and @BlueJacketsNHL for going all in at the NHL trade deadline.
Took a chance and it paid off.
Hopefully this changes the mindset for GM’s for future trade deadlines #StanleyCup

To be fair, Columbus has the 4th-most wins in the NHL since 2016. And play in the division that has produced the 3 Stanley Cup winners in that time. They’re not a fluke or bad team by any stretch.

The @BlueJacketsNHL are the first team in NHL history to sweep the President’s Trophy winners in Round 1! pic.twitter.com/zzAU7SNaOM

The @BlueJacketsNHL have defied all odds and are off to the Second Round! #StanleyCup pic.twitter.com/NJRCfLLmHO

Team who had never won a playoff series team sweeps one of best regular season teams ever.
That’s Hockey. (I owe Gino Reda like 3 bucks for that. He copyrighted it, and trust me, he will lawyer up if you Retweet it.)

Ok I have ventured out to the masses wearing my CBJ gear and BOOM...we still won! Back is feeling good tonight! #CBJ #columbusbluejackets

THE PLAYOFF BEARD FINALLY MAKES IT PAST THE FIRST ROUND! #cbj

Not a bad time to pick up their very first playoff win as they took down one of the greatest teams in NHL history while doing so.

The Blue Jackets sweep the Lightning after Tampa Bay had a historic 62-win regular season! pic.twitter.com/EvupjuOvXi

ARE YOU NOT ENTERTAINED!? #StanleyCup pic.twitter.com/cQgR0aeVaX

Wild to think Kucherov is going to win the Hart and Vasilevskiy likely takes home the Vezina and yet, their team can’t even generate a single win in the post-season.

You play the games for a reason.