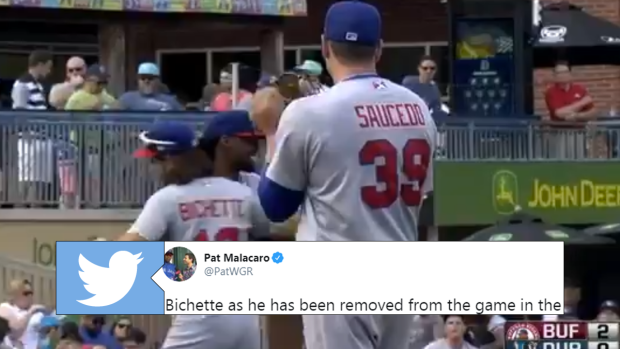 Bo Bichette has been the Blue Jays top prospect ever since Vladimir Guerrero Jr. got called up earlier this season and it appears as though is finally making his way to the big leagues.

The Buffalo Bisons were taking on the Durham Bulls and in the third inning, the Bisons’ starting shortstop was pulled out of the game. Bichette came off the field and almost everyone realized right away what that meant. He was going to the bigs. That’s one of the biggest moments in any professional athletes careers, and his teammates’ reactions to it were very wholesome.

Lots of hugs and high fives going around and even the bullpen ran in from the outfield to congratulate the youngster.

Hugs and handshakes in the #Bisons dugout for Bo Bichette as he has been removed from the game in the bottom of the 3rd inning. #BlueJays

One of Alen Hanson's biggest moments of the season: replacing Bo Bichette after the latter was called up to the big leagues. https://t.co/PjMguTjeaX pic.twitter.com/tEC5e1ZEgs

The Blue Jays have called up most of their young core at this point, with Nate Pearson being the next big piece to fall.

This move coincided with the Marcus Stroman trade, so it’s possible that Pearson isn’t too far away either. With all of these young, talented players up, they Blue Jays could definitely be an exciting team to keep an eye on, but there is a lot of unproven players in that lineup.

Still, Bichette clearly felt he was ready a long time ago.