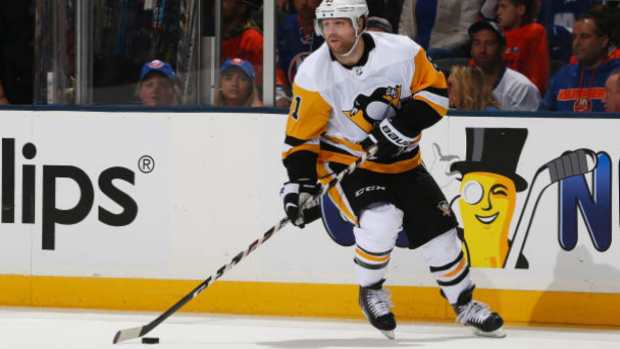 It appears that two-time Stanley Cup Champion Phil Kessel has played his final game as a member of the Pittsburgh Penguins.

Following the reports from The Athletic's Michael Russo and Josh Yohe and that the Penguins right-winger could be sent to the Minnesota Wild along with Jack Johnson for Victor Rask and Jason Zucker, TSN's Pierre LeBrun reported that Kessel wasn't too fond of waiving his no-trade clause to go to the State of Hockey.

A condition in his NTC allows Kessel to provide a list of eight teams that he can be traded to without the GM asking for permission. The Wild were not one of those teams, but that hasn't stopped general manager Jim Rutherford from shopping around the Wisconsin product.

On Friday, TSN's Bob McKenzie provided an update on the situation and said that's is merely a matter of time of when, not if, the superstar forward is moved, as well as which teams could pursue Kessel.

He's getting traded, it's just a matter of where and when I would think," said McKenzie to Leafs Lunch host Andi Petrillo and co-host Gino Reda.

From @TSNBobMcKenzie on @LeafsLunch1050: Kessel is highly likely to be traded, more a matter of where and when. WATCH: https://t.co/RMg6CAlSrQ pic.twitter.com/PCzK7ZO5jv

"He's not getting traded if there's not a good deal on the table. The Kessel deal is going to be done as soon as Jim Rutherford thinks he gets fair value on it, and he already thought, by all accounts, that he got fair value on a potential deal with the Minnesota Wild where Jason Zucker would come over from Minnesota and that there would potentially be an exchange of bad contracts - Jack Johnson out of Pittsburgh and Victor Rask out of Minnesota."

“But whatever the details may be or may not be in terms of the bodies flying back and forth, it seems pretty clear that Pittsburgh had a deal they thought was pretty amenable and that Phil Kessel was asked if he’d be interested in signing off on going to the Minnesota Wild.

“He’s got a no trade clause, there’s only eight teams in the league he can be traded to without his seeking his permission. Obviously Minnesota is not one of those eight teams that he can be traded to, so they had to ask Kessel his permission to trade him there. And Kessel, by all accounts thought about it for a bit and said no. Not right now anyways.

Absolutely dying laughing at the idea that Phil Kessel is just now finding out about the Minnesota Wild and has to “do research” on them. pic.twitter.com/ouYadcZL52

"Our understanding is maybe some of the teams that are on his eight-team list are calling because [the trade talk] has become that much more public. Maybe there are other the teams that aren’t on the list are calling Jim Rutherford and maybe he’ll get right offer from one of them and he’ll go back to Kessel and say ‘well what about THIS team?’ Or ‘what about THAT team’? Or maybe they do get one of the eight [that he can’t block].

“I don’t know what the eight teams are for Phil Kessel that he can be traded to, but I do know most players and agents in the NHL, when you’ve got a very small window like that you fill it up with potential teams you know you’re not getting traded to. So you [attempt] to create a virtual no trade clause.

“At the end of the day though, Phil Kessel’s going to recognize that the Penguins want to move on. He’s got to be a little bit tuned to that and realize do you really want to make stay in a place where they don’t want you?"

Rumours have swirled for months that Kessel may be on the move, and after a four-game sweep by the New York Islanders that eliminated the Pens in the first round of the Stanley Cup Playoffs, Rutherford noted that big changes could be in store in order to maximize the team's chances at getting back to the promise land during the rest of Sidney Crosby's peak years. Evgeni Malkin and Kris Letang's names have surfaced, but a deal involving Kessel seems like the best bet at this point.

Kessel, who played at the University of Minnesota, still has three years left with a cap hit and AAV of $8,000,000. The 31-year-old has averaged 76 points in four years in Pittsburgh (0.92 points per game), including back-to-back post-season performances that could've warranted a Conn Smythe.

Penguins, #mnwild in trade talks surrounding Phil Kessel. @JoshYohe_PGH has confirmed what I reported Tuesday about potential Jason Zucker-Victor Rask for Kessel-Jack Johnson swap. Lots of details in this story + other possible landing spots for Zuckerhttps://t.co/TOM2dZhbQk