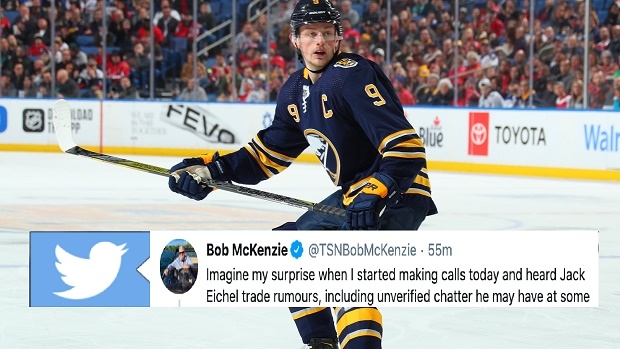 Bob McKenzie might be the hardest working guy in hockey.

Whether he’s working or not, Bob McKenzie always has the scoop people want to know.

Even though he’s entered into the semi-retirement phase of his career, no one can drop a hockey bombshell on Twitter quite like Bobby Mac. Today, he did just that.

Follow along, folks, because the ride that Bob McKenzie is about to take you on with this Twitter thread is a wild one, and it involves Jack Eichel trade rumours.

Imagine my surprise when I started making calls today and heard Jack Eichel trade rumours, including unverified chatter he may have at some point recently requested a trade out of BUF and that NYR were amongst interested teams. This, of course, required further investigation.

“I hear that (trade talk) a lot,” Eichel’s agent Peter Fish said. “Jack wants to win, he’s frustrated (not winning) but, no, he doesn’t want out. Jack is preparing to head to Buffalo at some point here and prepare for the season, whenever that may be. That’s all he controls.”

The messaging out of BUF is Sabres aren’t shopping Eichel, there’s no real desire to trade him, but since Kevyn Adams became new GM several clubs have called about Eichel’s availability. NYR believed to be one of the teams that called. So calls were made; calls were taken.

None of those talks with other clubs resulted in Eichel trade traction. But it’s also believed there has been dialogue between Eichel and BUF to ensure they both want the same thing (to get better obviously) and share the same timetable (sooner rather than later).

So, the face-value review appears as follows: Eichel doesn’t want out of BUF; BUF doesn’t want to trade Eichel; move along, nothing to see here. Fair enough. But some rumours are worth checking out/mentioning. Which I’ve now done. Now back to draft prep.

In short, it doesn’t look like Eichel will be on the move, and he and Buffalo look like they’re aligned in their goals going forward. However, for a brief moment, it looks like there were some chats.

Leave it to Bob to have all the details.