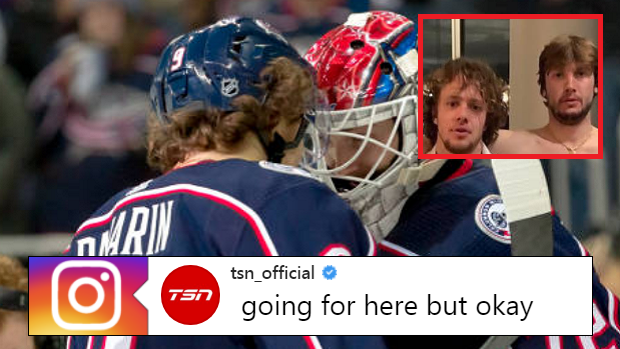 All kinds of weird is going on in the NHL right now.

The Calgary Flames are down after three games, Sidney Crosby’s season has come to an end mid-April and above all, the President Trophy winners are headed to the fairways after just FOUR games.

That’s right people, the Tampa Bay Lightning are out of the playoffs thanks to a DOMINANT stretch from the Columbus Blue Jackets. The series win marked the first in the franchise’s history, so players were logically fired up after. The night had its share of memorable post-game moments, but by far the weirdest one came in the form of an Instagram post on Sergei Bobrovsky’s account. The goaltender posed in a photo with fellow Russian Artemi Panarin and to be honest, we’re still not quite sure what they were going for here…

Not sure what Artemi #Panarin and Sergei #Bobrovsky were going for here but okay 🤷♂️ @bardown. . (H/T @sergeibobrovsky)

Bobrovsky’s caption for the photo (which was written in Russian) reads “What is normal”. Clearly these dudes have no idea!

Speaking of not being normal… how about Panarin’s awkward exchange with Nikita Kucherov at centre ice afterward? One guy clearly looked fired up, the other, well, wasn’t exactly on the same page.

Just months ago, the hockey world had no idea whether Panarin and Bobrovsky would still be on the team after the trade deadline. Now, they’ll face either the Boston Bruins or Toronto Maple Leafs for a shot cracking the Eastern Conference Final.

The Columbus #BlueJackets are moving on after sweeping the #Lightning!