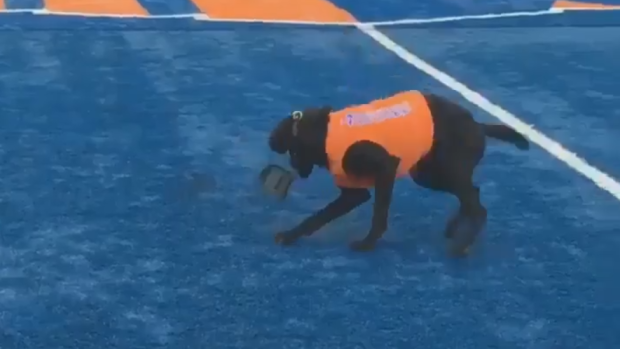 Everything is better with dogs, and that includes sporting events.

Back in July, the Trenton Thunder attempted to use a "Bat Dog" to aid in the retrieval of a batter's lumber once they were all done at the plate. While hilarious, the experiment was a bit of a flop -- an adorable one at that -- as the dog didn't retrieve the bat, he ran to the mound to play fetch with the pitcher.

Rookie the Bat Dog doesn't grab the bat, still does something awesome. pic.twitter.com/UIJt236O2C

But where the Bat Dog failed, the Kick-Tee Dog has succeeded. For the past few seasons Boise State has used a dog to help collect the tee after every kickoff and on Thursday night, the Broncos' dog was back in fine form.

Boise State has a dog who retrieves the tee after Kickoffs and I've never seen anything so pure pic.twitter.com/J4wBy3dgzY

Just like the players on the field, the Kick-Tee Dogs also have to hold Two-A-Days to ensure that when they go out to collect the tee, they actually return with the tee and nothing else.

There are some Good Dogs on The Blue this morning! Our friends at A Better Pet Dog Training are working hard! 🐶 pic.twitter.com/5QCjlRRWmK

The hardest working pup in sports.