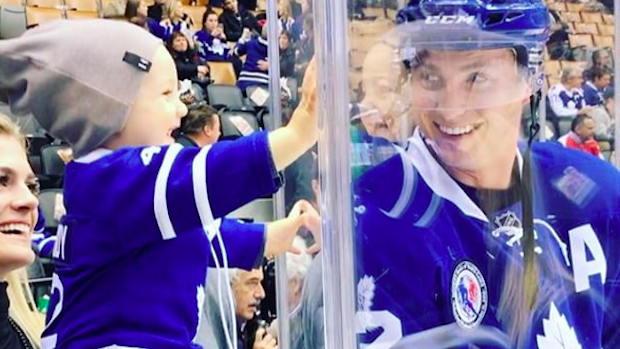 In today's NHL, pre-game rituals have become a staple for players before puck drop. Whether they have a different handshake with every teammate before leaving the locker room, superstitiously dress from left-to-right or right-to-left, need to be the final player to leave the ice following warm-ups, or just grow really, really, ridiculously long beards, every player seems to have something.

Toronto Maple Leafs' centre Tyler Bozak appears to have the most adorable pre-game ritual in the NHL right now, heading over to the corner during warm-ups and sharing a moment with his son Kanon Bozak. Little Kanon commonly rocks a No. 42 jersey reading "Daddy" on the back, and is held up to the glass by his mother, Molly Robinson. It doesn't get much cuter than that!

Baby Kanon Bozak getting a glimpse of his pops at work! #TMLTalk @bozie42

Baby Bozak has become quite the star around the Air Canada Centre this season...

Look who's back! #BabyBozak #TMLTalk

Tyler Bozak was out of the lineup on Monday night with a lower body injury, and is currently listed as day-to-day.