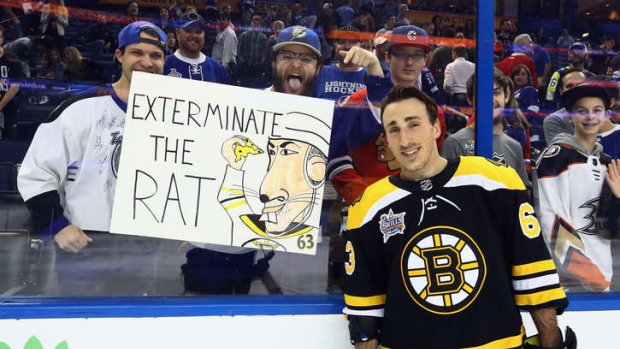 Despite currently serving five-game suspension for elbowing Devils forward Marcus Johansson, Brad Marchand was allowed to partake in the NHL All-Star Game down in Tampa.

When Marchand first joined the NHL, he was a pain in the ass to play against and became one of the better defensive forwards in the NHL. Marchand’s offensive prowess has exploded over the last two seasons, scoring 135 points in just 118 games skating predominantly with Patrice Bergeron and David Pastrnak.

Brad Marchand is a villain and he's better than your team's best player and he knows both. It's the best. Him and Bergeron are the perfect yin and yang and Pasta is Tum Tum.

As good as Marchand is, he's developed the reputation of being a rat out on the ice.

He’s knows how subtly cross the line, and has become notorious for his “accidentally on purpose” cheap shots he dishes out. He’s been suspended six times, handed down three fines, and forfeited a total salary of $700,000 , which is just north of the $650,000 league minimum

Whenever his name was publically announced over the weekend, the Tampa fans let Marchand know what they thought of him.

During the Skills Competition, the 29-year-old posed with a group of Bolts fans holding a sign saying “Exterminate the Rat.”

Brad Marchand (@bmarch36) is sure embracing his role as a villain at the #NHLAllStar game. . (📸Via: Bruce Bennett/Getty Images)

On Sunday morning, Marchand thanked the people of Tampa for their “love and support.”

So grateful for all the love and support from Tampa fans last night at the skills comp! Didn’t realize there were so many Bruins in Tampa

When he was announced prior to the start of the three-on-three tournament, Marchand blew kisses and waved to the crowd as they booed him.

And come game time, Marchand, once again, embraced the role of being a villain, as he waved to the fans following a goal he scored. He even faked an injury out on the ice in a pretty funny moment.

Knowing the cameras would be on him, the Halifax, Nova Scotia, product made sure to let everyone that all the hate coming his way wasn’t going to ruin his all-star experience.

Whatever your opinion of Marchand is, it’s pretty great to see him has some fun with the fans and totally embrace his role. After all, the All-Star Game is about entertaining hockey fans, and Marchand’s antics this weekend definitely made it all the better.

For a person that many thought shouldn't have been included on the roster, Marchand definetly put on a show. It's good to see Marchand's personality shine in a game that could use more characters.