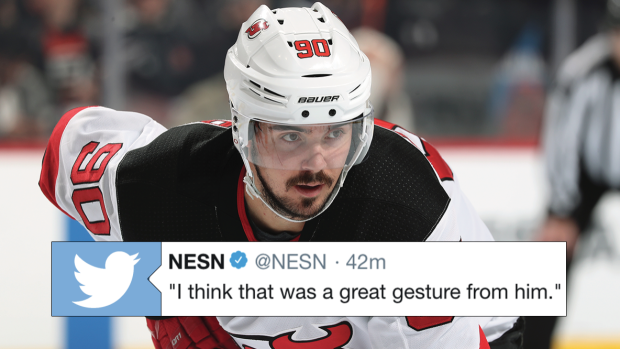 The Boston Bruins weren't particularly active on deadline day, but they did add Marcus Johansson (formerly of the New Jersey Devils) to their roster.  The one thing everyone brought up when the trade was made, though, was the hit that Brad Marchand delivered that sidelined Johansson last season.

Johansson had some strong comments about the hit at the time, but now he and Marchand are teammates and as he explained Tuesday, what happened in the past is water under the bridge.

New #NHLBruins F Marcus Johansson said Marchand called him after trade. "I think that was a great gesture from him ... I've heard great things about (Marchand), that he's a great guy, a great teammate."

Johansson, asked if he’s patched things up with Brad Marchand: “That’s water under the bridge. It’s hockey. It’s a tough game. He called me yesterday and we spoke for a bit.” pic.twitter.com/EM5KxSVbaF

Marcus Johansson said that Brad Marchand gave him a call yesterday after the trade to apologize for last year's hit.

"I think that was a great gesture from him. It just shows that he’s a really good guy and proves what everybody has been saying about him.”

The past is the past and the main focus for both Marchand and Johansson is winning a Stanley Cup together with the rest of their Bruins' teammates.  As for where Johansson will slot in the lineup, it appears as if he'll start on the second line.

Marcus Johansson will play the right side with David Krejci.

Joakim Nordstrom will slide in for Peter Cehlarik on the third line.

Kevan Miller will not play. John Moore is in.