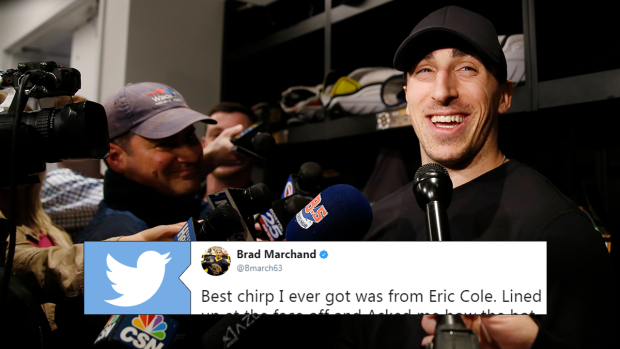 Brad Marchand is one of the most notorious chirpers in the National Hockey League, so to impress him with one of your beaks, it has to be a good one.

Marchand has been on fire on Twitter over the past couple of days. First he showed off that chirping ability we were talking about when a fan tried to call him a plug, then earlier today he called out the NHL for their failure to reach an agreement with the Olympics. Now, he’s shining the light elsewhere.

NHL fans always love to hear about new chirps at the pro level and Marchand shared the best one he’s ever heard, courtesy of the recently retired Eric Cole.

Best chirp I ever got was from Eric Cole. Lined up at the face off and Asked me how the hot dogs smelled. Had a good chuckle at that one

There were one of two meanings behind this. Either Cole was giving Marchand a heavy dose of hot dog breath or he was chirping the size or Marchand's nose. Either way if you have Marchand chuckling you know you've got a good one.

Last season we got to hear one of Marchand's chirps because Ray Ferraro was right in the middle of it. We're excited for hockey season to be back and hear more of this from between the benches.