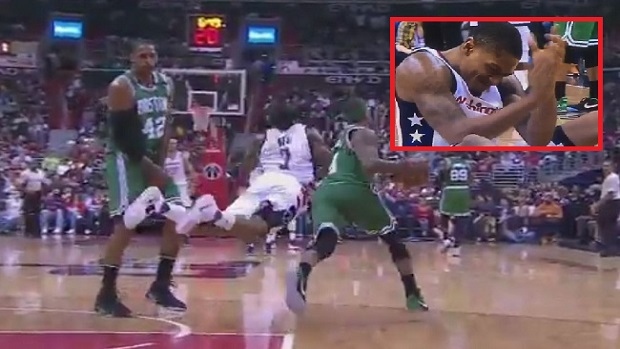 The second round series between the Boston Celtics and Washington Wizards has been absolute battle through the first three games.

With plenty of bad blood between the two sides, everyone expected it to be a rough series and both sides have lived up to the hype.

On Thursday night, they picked up where they left off and once again things got a little out of hand as Kelly Olynyk got laid out while being held back by a referee early on in the game.

Since it’s the playoffs, teams will do whatever it takes to win, especially if they’re down in the series.

The Wizards were in desperate need of a win on Thursday night and Bradley Beal wanted to contribute any way possible. Later on in the game, Beal was attempting to cover Isaiah Thomas but ran into a pick from Al Horford. That’s when he put his acting skills on display.

Bradley Beal with the most athletic flop of all time. pic.twitter.com/4VAO228pk1

We have seen some pretty bad flops in sports, but what makes this one of the worst ones is the fact that Beal shamelessly celebrated the call right after.

Kind of respect how shameless you have to be to celebrate a successful flop like this as Bradley Beal just did. pic.twitter.com/LmizB8Ioiy

Obviously he had to go the distance in his attempt to sell the flop, but he took things to a new level.

We can’t wait to see what happens during the rest of this series.