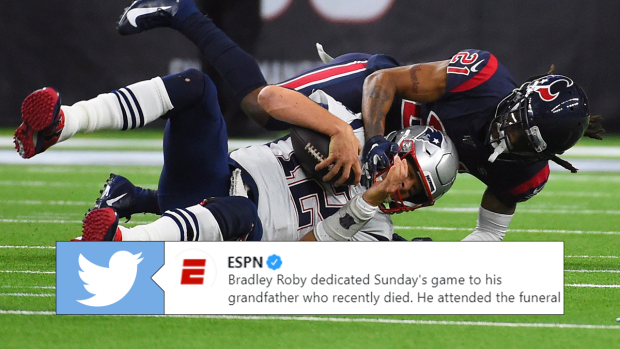 There’s always something a little extra special when players get to showcase their talents under the Sunday Night Football lights, and with the whole football world watching it’s a coveted game slot each and every week.

For Houston Texans defensive back Bradley Roby, the Texans’ Sunday night spot against the New England Patriots was even more memorable. After losing his grandfather and attending the funeral on Saturday, Roby came into the game and dominated Tom Brady and the Pats.

He finished the game with a sack, and interception, four tackles, and a tackle for loss. He also had another interception called back due to a flag.

The performance was extra special after making a promise to his late grandfather.

Bradley Roby dedicated Sunday's game to his grandfather who recently died. He attended the funeral on Saturday and promised him he would make "some plays."@BradRoby_1 finished with a sack, an INT, 4 tackles and a TFL 🙏 pic.twitter.com/mOZMLTLaWa

Make some plays, he did.

Roby noticeably had an extra pep in his step, and now we know why. It’s hard to cheer against  game like that.

“maybe he can see me now” pic.twitter.com/Js6DH2lZyj

ok cool cool cool lemme get this bowl of onions off my desk real quick.

"Maybe he can see me now" damn I dont cry from tweets/ articles a lot but damn pic.twitter.com/9xH0rar5Eo

Ain’t no maybe about it. He watched and likely lost his voice as well. Ball out den Roby @BradRoby_1