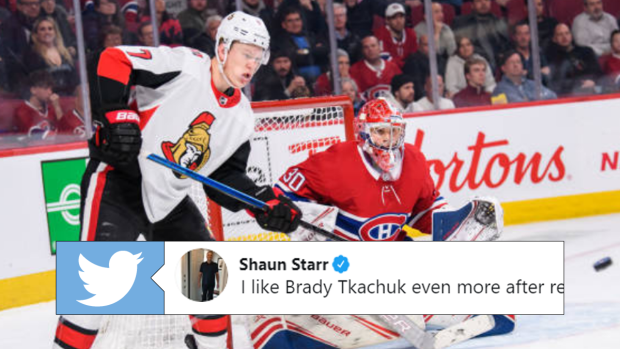 It’s always nice to get a win, but it’s even nicer to get a win against a bitter rival. The Montreal Canadiens and Ottawa Senators would certainly fall into the “bitter rivalry” category, as the two Canadian teams in close proximity to each other have locked horns in a number of memorable battles.

For Cayden Primeau, the win was extra special. It was his first in the NHL.

It’s no surprise that Brady Tkachuk was feeling extra mischievous in the rivalry game, and when Ben Chiarot buried the overtime winner to officially seal Primeau’s first win, Tkachuk tried his best to escape with the puck.

The following is an excerpt from Arpon Basu’s article in The Athletic:

After a quick congratulations for his rookie backup, Price skated across the ice and straight to Tkachuk, intercepting him on his way to the Senators dressing room to collect the puck from Primeau’s first win.

Tkachuk had it. And Price knew.

“I think so,” Price said when asked if Tkachuk was trying to steal the puck, as he untied his skates in the dressing room. “I was watching to see what happened to the puck and just saw him scoop it up.”

“Of course he was,” Gallagher said when asked the same question.

You can actually see Price quickly abandon the celebrations to stop the souvenir thief.

Primeau’s reaction is everything and of course Captain Weber goes to celebrate with him first.

The Tkachuks really know how to get under the skin of their opponent, even when the game is over.