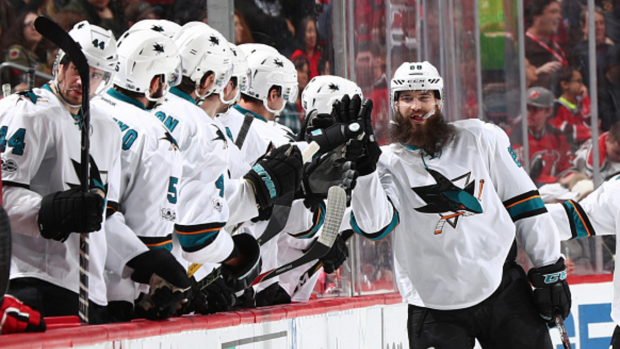 When it comes to the points race in the NHL, Connor McDavid and Sidney Crosby are neck and neck and continue to get all of the attention.

There's one player, though, that is right on their heels, and he happens to be a defenceman for the San Jose Sharks.

Yes, Brent Burns has 63 points this season which puts him four points behind McDavid for the league lead.  Saturday night against the Coyotes, Burnzie tallied two goals, his 26th and 27th of the season, and joined some exclusive company in the process.

Brent Burns of the @SanJoseSharks became the first defenseman to score at least 18 road goals in a season since Paul Coffey (22) in 1985-86. pic.twitter.com/2Vo88g6p6q

Coffey scored 48 goals in the 1985-85 season (career high) with nearly half of them being scored on the road.

Burns on the other hand has scored 66% of his goals on the road this season which is quite insane.

Not only is Burns having a historic season stats wise, but he could very well be named the Norris Trophy winner when it's all said and done.

Brent Burns paces all blueliners with 27-36—63 and matched his @SanJoseSharks record for goals in a season by a defenseman from 2015-16. pic.twitter.com/7AJZv5CyVu