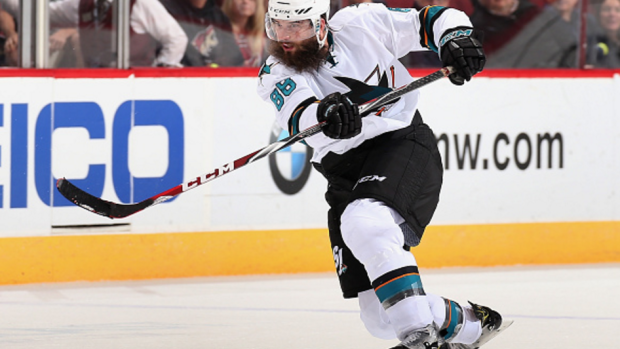 Like fine wine, Brent Burns has only gotten better with age.  The 31-year-old recorded a career high 75 points for the Sharks last season and he was a big reason why they were finally able to get over the hump and reach the Stanley Cup Final.

31 games into this season, the Sharks are on top of the Pacific Division and Burns' play is once again a big reason why.  In 31 games, Burns has 29 points and is a plus eight thus far, and those stats put him right in the thick of the Norris Trophy conversation once again.

Although Burnzie leads all defenceman in points at this point in the season, that isn't even the most impressive part of what he's done on the ice.  If Burns continues to play at the level he's playing at, he could finish the season with 30 or more goals, 70 or more points and 350 or more shots, something that's only been done by one defenceman in NHL history.

That is some elite company to say the least.  The fact that Burns is even on pace to join Bobby at this point in the season is incredible.  Of course, it's going to be tough for Burns to keep pace, but he was just three goals away from accomplishing this feat last season, so there is no reason to think that he can't become the second defenceman in NHL history to accomplish what only Orr has been able to.

Also, this is the start of our "Burns for Norris" campaign, and based on the numbers, we think the campaign is off to a wonderful start.