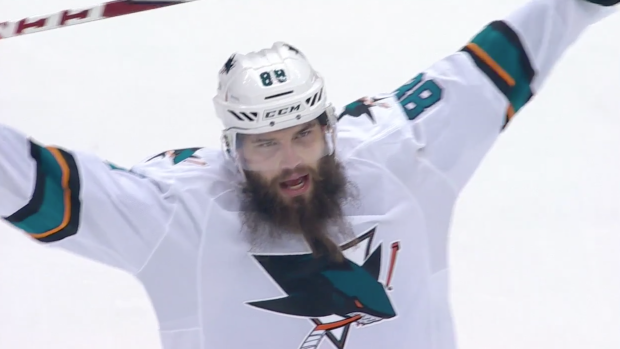 Brent Burns is one of our favourite hockey players because of his incredible personality and remarkable ability on and off the ice.
After a career year last season, the 31-year-old is piling up the points again this season with 26 in 29 games, which is good for second among defenseman, one point behind Erik Karlsson of the Senators.
Add in the fact that the Sharks are in first place in the Pacific division and primed for another long playoff run and life if pretty darn good for Burnzie.  Tuesday night, the good times kept rolling as the Sharks battled back to top the Leafs in a shootout, and during a stoppage of play in the game, Burns' personality came out as he couldn't help but sing along to "Cotton Eye Joe."
"Cotton Eye Joe" is one of those songs that you just can't not sing along to win it comes on, so Burns just did what anyone else would do in that situation.
"Livin' On A Prayer" is another example of one of those songs that you just can't help but sing along to when it's played, and Auston Matthews and Mitch Marner proved that fact earlier this season against the Canucks.

@MapleLeafs #TMLtalk #TOTN MARNER AND MATTHEWS SING ALONG TO "LIVIN ON A PRAYER" Karaoke on the Leafs bench!!! pic.twitter.com/L9dRfXEfV6

Now that we've seen Burns sing, we just need him to combine it with his on-ice dance moves that we saw last season for the ultimate in-game combo.