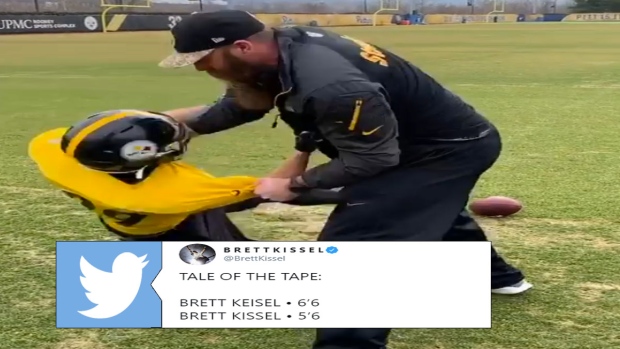 On Thursday night, Kissel happens to be playing at the Jergel’s Rhythm Grille in Pittsburgh for Brett Keisel’s Shear Da Beard event and the two went toe-to-toe on the football field a day before the show.

As you probably already guessed, it didn’t go very well for the musician.

It doesn’t matter how much equipment Kissel strapped on for this one, there was no way he was getting by the 2010 Pro Bowler or even getting him to budge.

TALE OF THE TAPE:

Yesterday I did drills, worked out, and sang songs with @bkeisel99. Right now, I’m at @Y108Pittsburgh giving away the last few tickets to #ShearDaBeardX tonight!

You’ve got to give Kissel some credit for even agreeing to this in the first place.