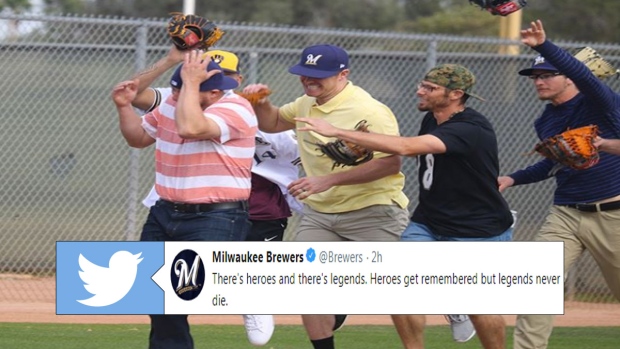 A lot of great baseball movies have been created over the years, but one of the best ones of all-time is easily ‘The Sandlot’. Released in 1993, 'The Sandlot' takes place in the summer of 1962 and tells the story of a group of friends who are addicted to the game of baseball and run into some unusual problems along the way.

Spring is right around the corner, which means the MLB regular season is a couple of weeks away. Before hitting the road for another long season, members of the Milwaukee Brewers recently took some time out of their busy schedules and recreated one of the most famous scenes from ‘The Sandlot’.

We’re not sure how they selected the players that they rolled with, but we’re guessing there was quite a few guys hoping to land a role in the team’s version of one of the most iconic scenes from a sports movie.

If you’ve never seen 'The Sandlot' before or have only seen it once and can’t exactly remember the scene, we’ll refresh your memory for you.

The film originally hit theatres on April 7, 1993, so we expect a lot of teams do something related to the movie as a way to honour the 25th anniversary of the film.