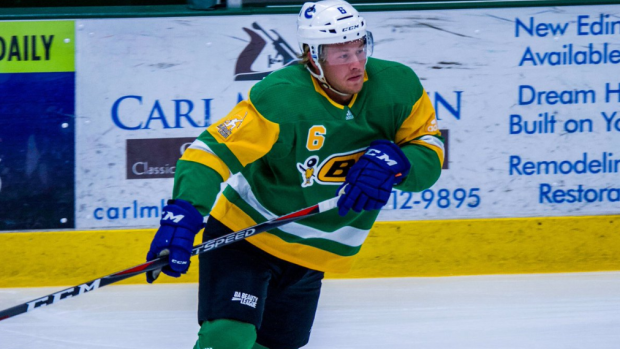 One of hockey’s favourite summertime tournaments came to a close on Wednesday night, and before it did, Brock Boeser made sure the fans in attendance got their money's worth.

Just a few weeks before NHL training camps get into the swing of things, hockey players associated with the state of Minnesota wrapped up Da Beauty League, as Team Bic defeated Team Velocity 3-1 in what was a relatively low scoring game for summertime shinny.

Team Bic, lead by the Canucks sniper, relied on the right winger to carry the club to victory. Boeser came into the game as the tournament's leading scorer with 15 goals and 33 points in eight games.

With the game tied at 1-1, the Burnsville, Minnesota, product scored a beauty of a game-winning goal by batting one out of mid-air. After cutting down the left side, quickly rotating his body and feeding Brock Nelson all alone in front, Nelson’s shot went airborne after being stopped by Velocity goaltender Hunter Miska (Minnesota Wild). Boeser was Johnny on the spot and batted in the puck on his first of two points on the night.

WHAT AN OUTSTANDING GOAL BY BROCK BOESER! Bats the puck out of the air and gives @BICRazors a 2-1 lead @Canucks @Buccigross #SCtop10 pic.twitter.com/TJWDNMtcpw

Talk about hand-eye coordination from the former baseball player.

Boeser would later go on to add an apple after feeding Nate Schmidt for the insurance marker to give Team Bic a two-goal lead.

Brock Boeser is your MVP

The soon-to-be sophomore was named MVP of Da Beauty League and finished with 35 points (16 goals, 19 assists) in nine games. Team BIC walked away as the 2018 John Scott Cup Champions.

Seth Helgeson and Jordan Schroeder tallied the other two markers. Brock’s father, Duke, who suffers from Parkinson’s, was named Coach of the Year.

In only 62 games with the Canucks last season, Boeser finished tied with Daniel Sedin for the team league in points at 55 with 29 goals and 26 assists. Although it was just summer league, don't be surprised to see Boeser near the top in goals and points in the entire NHL once the regular season comes to a conclusion.