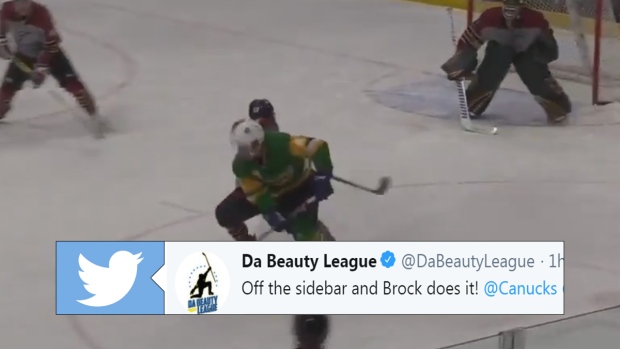 Brock Boeser has some Vancouver Canucks fans feeling optimistic about the team’s future based on what they’ve seen from the 21-year-old through his first 71 career games. In 62 games last season, Boeser scored 29 and added 26 assists for 55 points in 62 games and he’s picked up where he left off this summer in Da Beauty League.

The Burnsville, Minnesota native is representing Team Bic this summer and he’s tearing up the league. Heading into Monday night’s action, the Canucks winger sits tied for the league lead in goals with 10 and sits atop the total points leaderboard with 22 points in just five games.

Boeser’s team went up against Team Tradition on Monday at Braemar Arena in Edina, Minnesota, and he kept his hot streak going with another goal.

Off the sidebar and Brock does it! @Canucks @Buccigross #SCtop10 pic.twitter.com/xAa8UvTxwn

The youngster made a couple of good moves to fake out the defenceman and then to pick the puck back up after he completed the spin, and then topped it all off by going far side on the goalie for his 11th goal in six games.