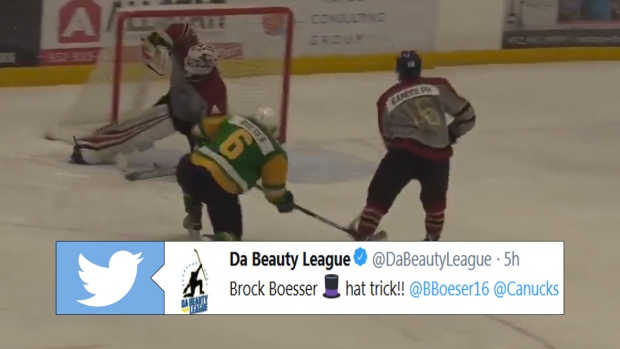 Vancouver Canucks fans haven’t had much to cheer about in recent years, but Brock Boeser is hoping he can help play a big part in turning around the franchise.

The 21-year-old gave Canucks fans a reason to be excited for the near future as he managed to total 29 goals and 26 assists for 55 points in just 62 games before his season was cut short due to a back injury. On Wednesday, the Burnsville, Minnesota native was back in game action for the first time since March 5 as he made his summer debut in Da Beauty League and he picked up right where he left off.

Brock Boeser with his first goal in a few months! @Canucks @UNDmhockey pic.twitter.com/GVi8Ugl8C6

Boeser is representing Team BIC this year and that wasn’t the only time he found the back of the net moments later in the same period.

The 2018 Calder Trophy finalist wasn’t done there, though, as he capped off the hat-trick the following period.

Boeser appeared in seven games with Velocity Hockey last summer where he totaled eight goals and six assists for 14 points and it’s looking like he’ll set a new personal best this summer.