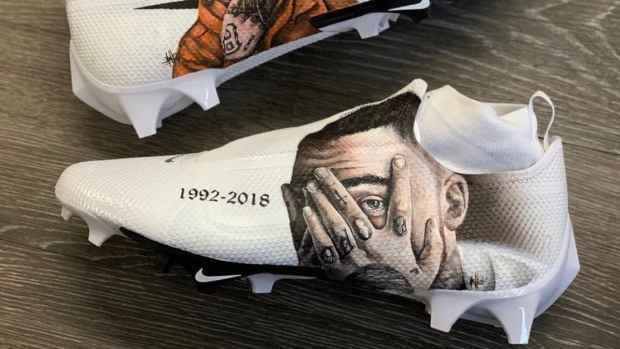 The tragic passing of Mac Miller two years ago has still left many of his fans devastated, and this weekend, Cleveland Browns wide receiver Jarvis Landry is going to pay tribute to the fallen rapper with a pair of custom cleats.

Designed by the well-known customs artist Mache, these cleats depict Miller on both sides, with 1992-2018 written on one side.

Jarvis Landry is one of my favorite Browns for a lot of reasons. Him paying homage to Mac Miller on his cleats this weekend is just one more

Of note: The Browns play in Pittsburgh against the Steelers this weekend. Miller hailed from Pittsburgh, so Landry taking this occasion to wear the custom cleats is pretty special.

Through the first five games of the season, Landry has caught 21 passes for 279 yards, but he remains without a receiving touchdown despite the Browns' strong 4-1 start. With that said... he does have a passing touchdown, thanks to a brilliant flea flicker play and the hands of OBJ.